Green Deliveries for Meals on Wheels in Wolverhampton

Meals on Wheels customers in Wolverhampton will soon be getting their food delivered via zero emission electric vans after the council took delivery of 9 brand new vehicles.

The new Nissan E-NV200 battery powered vans are replacing old diesel vehicles as part of the council’s fleet electrification program to contribute towards a greener city.

Meals on Wheels drivers deliver 1,700 dinners across the city every week and cover around 73,000 miles a year.

Replacing the old vans with new zero emission alternatives will prevent significant amounts of carbon dioxide being emitted into the atmosphere and will be more economical as the new vehicles will be cheaper to maintain.

The new vehicles are currently being fitted with ovens and fridges before they take to the streets.

City of Wolverhampton Council declared a climate emergency in 2019 and has made a commitment to be net carbon neutral by 2028. The council endorsed an action plan last year setting out the steps it will take to meet the ambitious 2028 target.

The council has around 450 vehicles in its fleet which currently are responsible for emitting 2,500 tonnes of harmful carbon dioxide into the environment each year. This is around 25% of the council’s total emissions, which has prompted the council to urgently put a programme in place to electrify its fleet, alongside its partner organisation Wolverhampton Homes which also operates a fleet of vehicles supplied by the council.

“The arrival of these new vans for Meals on Wheels follows hot on the heels of the electric vans which our parking services team received last month and over the comings months and years many more will be arriving.

“I’m absolutely thrilled that our Meals on Wheels service is one of the first to benefit from the new zero emission electric vehicles. It is one of our most popular services, delivering a hot, nutritious meal to anyone in the city who needs it, as well as a friendly face and a kind, caring driver who keeps an eye on people and takes time to have a chat.

“Not only does the service care about its clients, but with these new vans it is demonstrating that it and the council also cares about the planet too.”

Meals on Wheels in Wolverhampton delivers hot, nutritious meals at a reasonable cost. The service is available to anybody who wants it and deliveries are flexible to suit customer requirements. For more information visit Meals on Wheels. 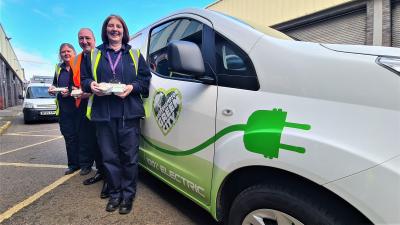 Front to back - With one of the new zero emission electric vans are Meals on Wheels delivery driver Debbie Gait, City of Wolverhampton Council's cabinet member for city environment and climate change Councillor Steve Evans and driver Jackie Kinsey