The City of Wolverhampton is gearing up for a free event for all the family to mark the national Armed Forces Day celebrations taking place at the end of the month.

Armed Forces Day, which takes place on Saturday 26 June, is a chance for people to show their support for the entire armed forces community – including those currently serving, their families, veterans and cadets.

The countdown to Wolverhampton’s celebrations will begin with a flag-raising ceremony at 11am on Monday 21 June outside the Civic Centre when the Armed Forces Day flag will be proudly flown.

On Armed Forces Day itself, West Park will be buzzing with activities for people of all ages as it becomes the focus of family celebrations between 12noon and 4.30pm.

Due to the Covid-19 pandemic, people must pre-book their free tickets for the event in order to control the numbers attending.

There will be live music from Chris Westwood, The Bluebird Belles and Helix Acoustic and a military drill and inspection in the event arena at 1pm.

There will also be the chance to meet and chat with local forces as well as information stands.

The finale of the event will be a skydiving display from The Wings Parachute Display Team which takes place at 4.30pm (weather permitting) with four parachutists jumping from a helicopter and landing into the event arena.

Mayor of the City of Wolverhampton, Cllr Greg Brackenridge, said: “As a city, we have a special relationship with our armed forces. Armed Forces Day is an opportunity to celebrate all that the forces do to defend the nation at home and abroad and as an ex-serviceman myself, this is something that is close to my heart.

“We have a fantastic event planned to mark Armed Forces Day. I would love to see as many people as possible come along and have a great time with their families while showing their support for the forces and thanking them for all they do for our city and country.”

Due to the Covid-19 pandemic, this year the event will be ticketed in order to control numbers attending. Tickets are free but must be booked in advance. You can get your tickets at Universe. 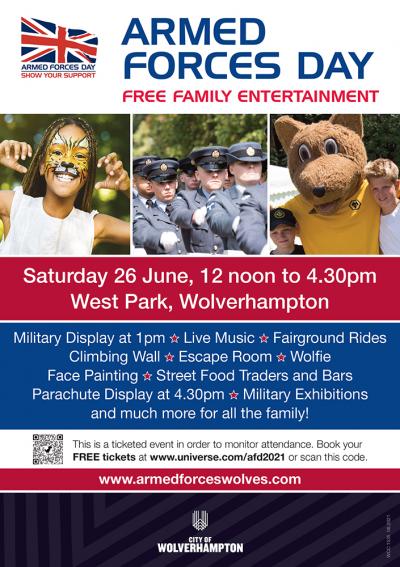