City of Wolverhampton Council has crushed 2 transit vans and 2 cars in a bid to clamp down on fly tippers across the city.

All 4 vehicles have been captured on CCTV on multiple occasions, illegally dumping rubbish at Drayton Street – one of Wolverhampton’s fly tipping hotspots.

The fly tippers were caught dumping fridges, household waste and bagged waste, less than 10 minutes away from both Wolverhampton tips.

The City Council contacted the registered keepers to come forward for interviews under caution regarding the fly tipping and to claim the vehicles.

The owner of the white transit van, Adrian Ripa, admitted 4 flytipping offences between July 2018 and March 2019 when he was interviewed by council officers.

In May, at Wolverhampton Magistrates' Court, Ripa was handed a £680 fine, costs of £2305.28 and a £68 victim surcharge, with rights to the vehicle handed to the council.
After receiving no correspondence from the remaining registered keepers, the City Council decided to take action and crush all vehicles for scrap metal.

Councillor Steve Evans, Cabinet Member for City Environment at City of Wolverhampton Council said: “Fly tipping is a serious crime that will not be tolerated.

“All vehicles have been captured on CCTV with the owners dumping waste at the same spot – there is no excuse for this behaviour and it is simply not acceptable.

“There is clear signage warning these culprits that CCTV is in operation and stating the fines they will get if they fly tip – and yet they still choose to commit the crime.

“Since we launched our ‘Shop a tipper’ campaign we have seen a reduction in fly tipping by 50% and we will keep clamping down until the message hits home.

“We do not want fly tipping in our city, if you don’t pay the fine – we will seize your vehicle and it if you don’t come forward to claim it, it will be crushed.

“I would like to place on record my sincere thanks to the continued efforts of the Council’s environmental crime team ensuring - those who choose to blight our city are not getting away with it."
The City Council seized another vehicle yesterday, bringing the total number to 8 vehicles seized for fly tipping in Wolverhampton, so far in 2019.

Today’s actions follow the City Council’s ‘Shop a tipper’ campaign to clamp down on fly tippers across the city. To find out more about the campaign visit Shop a tipper. 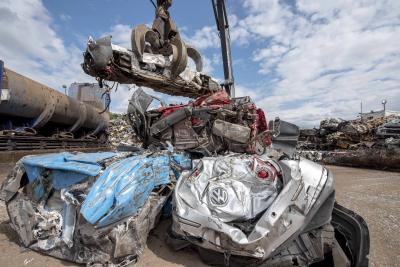