Flu Fighters fight back – with a little help from their friends

The Flu Fighters will be returning to help protect children from influenza this winter – with a little help from young Wolverhampton artists.

After doing battle with Chilly, Achy and Snotty in the first Flu Fighters story last year, our heroes are preparing to take on a new group of baddies this time around.

The winning designs have been incorporated into this year's story, Flu Fighters in The Battle of Planet Bogey, which will be distributed free to all infant, junior and primary school pupils during the autumn term to encourage them to have their free flu vaccine, administered via a quick and painless nasal spray.

Councillor Jasbir Jaspal, the City of Wolverhampton Council's Cabinet Member for Public Health and Wellbeing, said: "We’re really keen to encourage as many people as possible to have the flu vaccine each and every year. The nasal spray is the best defence children have against the flu; it's free, safe and – because it is a spray rather than injection – it’s totally painless too.

“The Flu Fighters campaign was incredibly successful last year, with thousands more children receiving their free flu vaccination as a result, and so we are delighted to be bringing it back again this autumn.

"To make the sequel even more exciting, we wanted some new flu aliens for our Flu Fighters to battle – at the same time helping to highlight the fact that the flu virus mutates, which is why people need to be vaccinated each and every year.

"It was great to be able to ask children to help create our new baddies, and we were amazed to receive so many high quality entries from children across Wolverhampton."

Each received certificates and toy shop vouchers for their winning designs, presented to them by Councillor Jaspal and Wolverhampton's Director of Public Health, John Denley.

Councillor Jaspal said: "Our team of judges had an incredibly difficult task in choosing the best designs, and we'd like to say a big thank you to the hundreds of children who entered the competition. In particular, I'd like to pass on our congratulations to Fynn, Ayla, Evie and Cleo for their wonderful creations."

The Flu Fighters campaign devised by the City of Wolverhampton Council, Wolverhampton Clinical Commissioning Group and the Royal Wolverhampton NHS Trust helped bring about a 13% increase in the number of children who received their free nasal spray in 2018.

“We had a tremendous response from young people, parents, schools and healthcare professionals, but more importantly, the number of children having their free nasal spray increased dramatically.

"Indeed, uptake in Wolverhampton, which had previously been the worst in the Black Country, was the best last winter; we hope the response to this year's campaign will be even better."

This year, all children from Reception to Year 6 at infant, junior and primary schools in Wolverhampton, and all children in special schools, will be offered the free flu vaccination at their school. The vaccine is also available to children aged 2 and 3, and children with some long term health conditions, through their GP.

To find out more about the free nasal spray, and to read and download the first story – Flu Fighters Versus Chilly, Achy and Snotty – please visit Flu Fighters.

Free copies of the sequel, Flu Fighters in The Battle of Planet Bogey, will be distributed to children via their school this autumn by Vaccination UK, along with parental consent forms and information about the flu vaccine.

As well as the vaccination for children, people with long term health conditions, the over 65s, carers and care staff, people in long stay residential care homes and pregnant women are also eligible for a free vaccine through their GP or pharmacist, while anyone else can get their vaccination from many local pharmacies for a small charge. For more information, please visit Flu Vaccines. 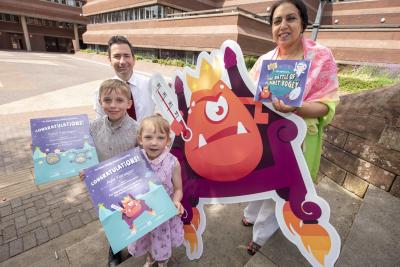 Fynn Flanagan, who created Wheezy and Sneezy, the Flu Twins, and his sister Ayla, who helped inspire Lord Fever, with the City of Wolverhampton Council's Cabinet Member for Public Health and Wellbeing Councillor Jasbir Jaspal and Wolverhampton's Director of Public Health, John Denley 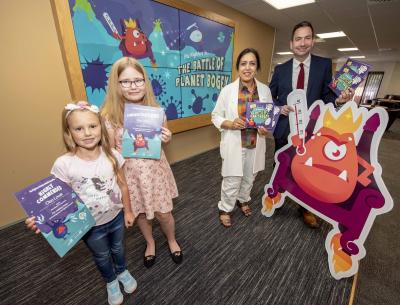 Left, Cleo Lovatt, who was commended for her creation, Freezy, and Evie Clarke, who helped inspire the character of Lord Fever, with the City of Wolverhampton Council's Cabinet Member for Public Health and Wellbeing Councillor Jasbir Jaspal and Wolverhampton's Director of Public Health, John Denley 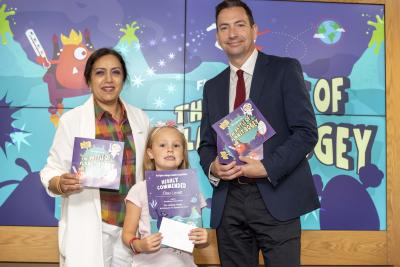 Cleo Lovatt, who was commended for her creation, Freezy, with the City of Wolverhampton Council's Cabinet Member for Public Health and Wellbeing Councillor Jasbir Jaspal and Wolverhampton's Director of Public Health, John Denley 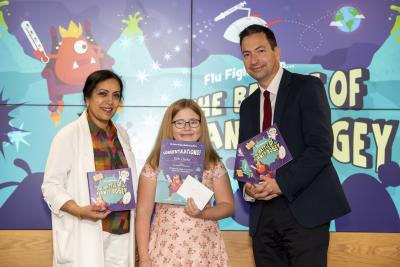