Father and son traders in Wolverhampton have been sentenced to community orders for continuing to sell illicit cigarettes and hand rolling tobacco despite a previous warning from the city council.

Francesco and Angelo Salvo, who traded at the former Salvo’s Convenience in Parkfield Road, Ettingshall, were both given community orders and instructed to pay a total of £2,700 in court costs. Victim surcharges were also ordered in both cases.

At Dudley Magistrates Court this week, both men pleaded guilty to 6 offences each under the Trade Marks Act and three each under Tobacco Regulation offences, which related to the pouches of hand rolling tobacco being labelled with foreign language health warnings, having no combined health warnings and breach of the packaging requirements.

Francesco Salvo also pleaded guilty to possession for supply of a dangerous product and Angelo Salvo admitted failure to pay duty, contrary to the Proceeds of Crime Act.

Francesco Salvo was given a 12 month community order, with 80 hours unpaid work concurrent on all offences. He was ordered to pay a contribution to costs of £1,500 and a victim surcharge of £90.

Angelo Salvo was given an 18 month community order with 15 rehabilitation activity requirement days and a 4 week electronically monitored curfew. He was ordered to pay a contribution to costs of £1,200 and a victim surcharge of £90.

The court heard that a previous warning had been given to the store in February 2015 following a seizure of illicit tobacco products from the premises.

Then, in February 2020, City of Wolverhampton Council’s Trading Standards officers carried out a covert test purchase at the store, when a packet of 20 Richmond cigarettes, which were believed to be illicit, were sold for £4.

A follow up visit was then made in March by officers, a tobacco detection dog and West Midlands Police.

During that visit, they discovered 2,381 single illegal cigarette sticks, 850g of rolling tobacco and 5 packets of foreign labelled Blunts. The items were found inside the store and in a white van belonging to Francesco Salvo, parked outside the shop

The tobacco products were a mixture of counterfeit, non duty paid or illicit cheap white cigarettes smuggled into the UK. They were incorrectly packaged and did not bear the correct UK language health warnings.

In addition, 336 Sildamax Sildenafil Citrate 100mg tablets, a pharmacy controlled drug used to treat erectile disfunction, were discovered in the shop and in the parked van. The sale of such tablets by the premises is a breach of the Human Medicines Regulations 2012.

The Salvos sold the business in August 2020 and the store is now under new ownership.

Councillor Steve Evans, cabinet member for city environment and climate change, said: “This is a great result for our Trading Standards team who work extremely hard to crack down on any business selling and supplying illicit and dangerous products. Sale of such items is a serious crime that robs the public purse of much needed revenue, but also poses a real threat to public health.

“Illicit cigarettes hold even greater risks than legitimate ones as they often contain far more nicotine. Some fake products can contain high levels of lead and arsenic.

“The selling of the pharmacy controlled drugs without medical supervision carries a real health risk, with potential side effects of these drugs including vision loss, heart attack or blood clots.

“Our Trading Standards officers carry out operations such as this to help protect the public from dangerous products, as well as to protect our legitimate businesses.” 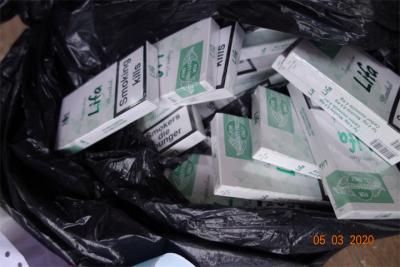 Some of the illicit cigarettes seized