More than 150 electric bikes were today (Wednesday 8 December) made available for hire at docking stations across the region, giving even more people the opportunity to cycle,

The eBikes, made here in the Midlands by renowned cycle manufacturer Pashley, are the latest addition to the West Midlands Cycle Hire (WMCH) scheme and available in eight town and city centres.

Their arrival will allow riders to make longer journeys more easily and will offer extra help to those who may have difficulty pedalling a regular cycle or struggle with hills. And affordable hire costs give those put off by the expense of buying a new eBike the opportunity to give it a go.

The roll-out follows the successful launch of the West Midlands Cycle Hire scheme earlier this year which has so far introduced 1,350 distinctive green and grey branded pedal bikes onto the region’s streets and seen more than 169,000 rides taken. The new eBikes have their own green and purple branding to make them easy to identify but will use the same docking stations.

Like the WMCH pedal cycles, which are also made by Stratford-upon-Avon based Pashley, the new eBikes are available for hire in Birmingham, Coventry, Sandwell, Solihull, Stourbridge, Sutton Coldfield, Walsall and Wolverhampton.

Mayor of the West Midlands Andy Street and Councillor Ian Brookfield, leader of City of Wolverhampton Council, were among the first to use them at a launch event in Wolverhampton city centre.

The Mayor said: “It has been a fantastic year for cycle hire, with more than 170,000 journeys taken on our fleet of bikes since March’s launch. Now, with the scheme having proved so popular, we are ready to take the next step with West Midlands Cycle Hire and roll out eBikes.

“The greater range on the eBikes makes them a clean and green alternative to the car for even more journeys around our region, whilst they will also help more people get involved with cycling and perhaps even try it for the first time.

“We know cycling and walking has huge benefits both for the environment and for people’s mental and physical health, as well as being great fan. And so that’s why we are looking to expand the scheme throughout 2022, making sure we reach more people and communities across the West Midlands.”

Councillor Ian Brookfield, City of Wolverhampton Council Leader, said: “The launch of the eBikes in our city today is a really exciting addition to the successful West Midlands Cycle Hire scheme and I hope people will come and try them out.

“We’ve been really pleased to see the way people have got involved with the scheme, which was first launched in March. Since then, we have seen riders clocking up more than 50,000km on bikes they have hired in the city and the new eBikes will offer another option.

“We’re working really hard to support cycling in Wolverhampton and make it easier for our residents to consider this healthier and greener option. We’ve created a new pathway for cyclists and walkers along the entire length of Ring Road St Peters and we’re developing a continuous cycle route along the A4124 Wednesfield Road which will provide a key link between the city centre and New Cross Hospital.

“And we hope our hosting of next year’s Commonwealth Games cycling time trial will encourage people to enjoy this healthy, fun and environmentally friendly method of transport.”

West Midlands cycling and walking commissioner Adam Tranter added: "eBikes have totally transformed cycling for many people, including me; using an eBike made it much less likely for me to use a car

“From a quick trip across town or to meet friends, having electric assistance is really helpful on the hills or just when you want to take it easy. I'm pleased that more people in the West Midlands now have the chance to use an eBike thanks to this new fleet."

Investment in cycling facilities is a key part of the region’s plan to encourage more alternatives to the car for shorter journeys around busy towns and cities with a view to reducing congestion, improving air quality and helping the region achieve its #WM2041 net zero carbon target.

Councillor Ian Ward, WMCA portfolio lead for transport and leader of Birmingham City Council, said: “Cycle Hire has already proved a success this year, especially good for those people who cannot buy a bike outright or don’t have room at home for one. Now eBikes will make cycling even more accessible for those people who need a little extra help with cycling.

“But this is just one part of the £40 million investment TfWM and partner councils are making in cycling and walking including the new safe cycle routes under construction, bike storage racks being installed and schemes to encourage more people to give it a go.”

WMCH is operated by Serco under a 5 year contract from Transport for West Midlands (TfWM), which is part of the West Midlands Combined Authority (WMCA). The bikes, docking stations and locking mechanisms are all manufactured in the region.

It costs £1.50 to unlock an eBike and 10p per minute after that – or 5p per minute with a WMCH bundle deal which means a half hour ride could cost as little as £3. The bikes are hired using the Beryl Cycle Hire app where the eBike locations are clearly marked.

Sam Jones, Serco’s Micromobility Director, said: “Our team on West Midlands Cycle Hire is looking forward, working with our partners Pashley and TfWM, to the introduction of the new eBikes. The scheme is already proving popular with nearly 60,000 different riders and the introduction of eBikes will enable more people to use the scheme and open up a broader range of journeys for both existing and new riders.” 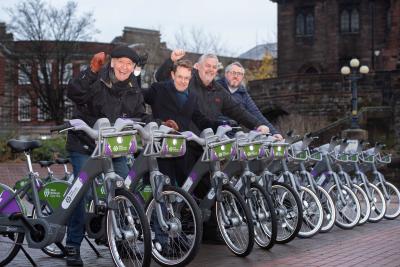