Councillor Sandra Samuels OBE is set to make history by becoming the first person of African Caribbean heritage to become Mayor of the City of Wolverhampton on Wednesday (18 May).

Councillor Samuels will also be only the 11th woman in almost 200 years of history to become Wolverhampton’s first citizen.

She is due to take over the reins from Councillor Greg Brackenridge when councillors take a vote at Wednesday night’s Annual Council Meeting. It is customary that the nominated candidate for the politically neutral role of Mayor has cross party support and is voted into office unopposed.

Councillor Samuels spent 40 years working in the NHS as a nurse, theatre sister and manager. She has also been a trade union official, school governor, community activist and volunteer. She currently represents the Ettingshall ward for the Labour Party.

She was awarded the Order of the British Empire medal in 2015 by Her Majesty the Queen for services to local government and politics.

Councillor Samuels said: “Becoming Mayor of the City of Wolverhampton will be my life’s greatest honour and I am proud beyond words that my fellow city councillors are due to make me the first person of African Caribbean heritage in 200 years to hold this most prestigious role.

“It is my sincere hope that wearing the Mayoral ceremonial chains of office of our great city as a proud black lady will inspire others from underrepresented groups to believe in themselves and know that anything is possible.

“This is why the theme for my year in office will be ‘Dare to Dream’ - it’s the ability to hope and desire a better future.

“The city will have my unwavering commitment as Mayor, there is so much to look forward to with Her Majesty the Queen’s Platinum Jubilee celebrations and Wolverhampton’s participation as a venue in the Commonwealth Games.

“I’m so looking forward to being a hard working ambassador for the people of this city, getting out and meeting them and celebrating the rich tapestry of our diverse communities.”

Councillor Samuels’ consort during her Mayoral year will be her husband of 40 years Karl Samuels.

Councillor Dr Michael Hardacre is set to become Deputy Mayor for 2022 to 2023. 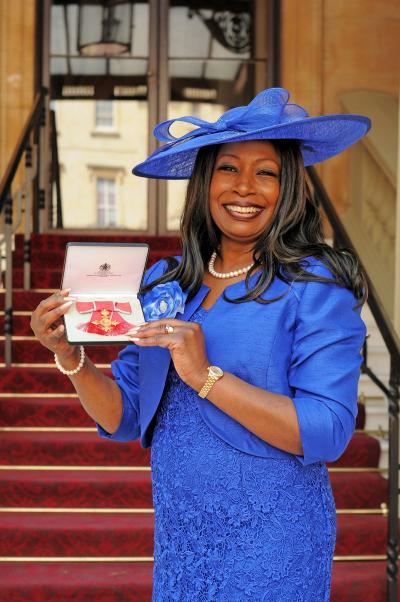 Councillor Sandra Samuels receiving her OBE at Buckingham Palace in 2015