City of Wolverhampton Council has thanked local firm Marstons and Wolverhampton Wanderers FC for going above and beyond to help set up an emergency food distribution hub.

The council was able to convert its WV Active Aldersley leisure centre into a hub to distribute thousands of food parcels in just a few days.

The efforts of hundreds of redeployed council workers, as well as support from Marstons and Wolves, has enabled Wolverhampton to be one of the first places in the country to be able to get supplies to people who are shielded at home and have nobody else to turn to.

In its first week of operation, 1,000 food parcels were distributed.

The council approached Wolverhampton-based Marstons for advice on logistics when setting up the hub. The company, which delivers to 13,000 outlets every week, responded incredibly quickly and made the ongoing expertise of their logistics team available immediately.

The firm also provided the hub with motorised pallet trucks as well as thousands of toilet rolls, which would normally have been used in Marstons pubs, to be included in the food parcels.

The company also provided the use of its software to help plan and manage the emergency deliveries.

David Nijs, Marstons director of logistics, said “The council asked Marstons for our assistance and we dropped everything to help because we understood the importance of the extremely important task the council has undertaken. It is fantastic we were able to help.”

Meanwhile, Wolverhampton Wanderers has allowed the council to make use of its ‘dome’ building which is located next to WV Active Aldersley and is now providing essential space for staff training.

Councillor Ian Brookfield, leader of City of Wolverhampton Council, said: “I am bowled over by the support from Marstons and Wolves – two of our biggest and best local partners. The council could quite simply not have got this hub operational as quickly as we have without their support which has gone over and above.

“These are two companies which are part and parcel of the fabric of our city and when the call came to help, they stepped up to the mark.

“On behalf of the vulnerable people who are now benefitting from food parcels, I want to thank them for their amazing support.

“Wolverhampton has rightly won national plaudits for our response to this crisis and it is a result of our community pulling together as one city.” 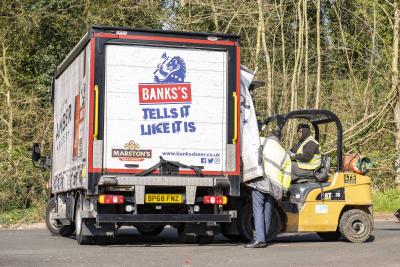