Thousands of children from low-income households across Wolverhampton benefitted from free school meals over half term last week after the city council stepped in to provide support.

On the eve of half term, the council announced that it would provide support to any child from a low-income home during the holiday who normally received free school meals during term time. The council made £250,000 available to fund the scheme.

Due to tight timescales to get the scheme operational, it was administered jointly by some city schools who distributed several thousand food vouchers and the council’s emergency food distribution hub which delivered approximately 5,000 food parcels directly to households.

Exact numbers are still being calculated, but around 85% of the children who are normally eligible for income-based term time free school meals received help last week.

Councillor Ian Brookfield, leader of City of Wolverhampton Council, said: “I am so proud of everyone who made last week possible, thousands of Wolverhampton children received food to ensure they didn’t go hungry over half term.

“We were one of only a few councils across the country to provide this sort of assistance and it was a fantastic effort, by council colleagues and city schools, to get it up and running in such a short amount of time.

“As I have said repeatedly throughout this pandemic, Wolverhampton is a city where we look out for each other and look after our own. We have seen so many instances of people coming together for the greater good and last week is a prime example of that.

“We were delighted to see that the footballer Marcus Rashford, who has done so much to raise the profile of food poverty, acknowledged what we were doing in Wolverhampton and highlighted us on social media.

“The Christmas holidays will soon be here and we look forward to hearing from government what support will be made available for households who are struggling to make ends meet.”

Wolverhampton currently has 16,000 primary and secondary pupils who are eligible for free school meals – or around 36% of all local pupils. This is far above the national average of 17%.

The figure is expected to increase further due to the Covid-19 pandemic causing increased hardship and rising unemployment.

Many children who receive free school meals come from households where parents/guardians are in work, but low pay makes it hard to make ends meet.

The council has made ensuring residents in need receive food a priority during the pandemic, delivering more than a million meals to vulnerable people who were shielding at home.

Last month, the council announced that it would continue delivering food parcels to the city’s network of food banks until Christmas. 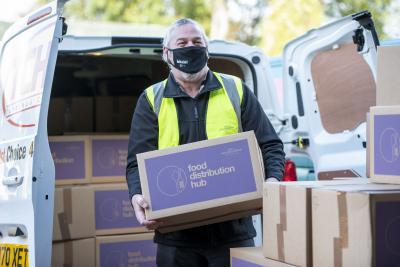 Leader of City of Wolverhampton Council, Councillor Ian Brookfield, out delivering food during the half term holiday