City of Wolverhampton Council has launched a consultation on proposals to create a safer environment for pedestrians in the city centre.

Much of the city centre is covered by an official pedestrianised zone, but some delivery vehicles regularly endanger shoppers by ignoring the time restrictions which govern when they can enter the zone.

This has led to vans and lorries driving through pedestrian streets during the busiest times of day, despite continual enforcement activity.

In June, in response to a need to address issues of public safety associated with the COVID-19 pandemic, trial changes were made to the times and access arrangements to the pedestrianised zone.

Following the success of the trial, it is now proposed to make the following permanent changes:

The access control bollards, which are a common feature of many town and city centres, would have safety features including a green/red light warning system, an audio warning message and a detection system that would prevent them from rising if a vehicle was close by.

The council has launched a 6 week consultation, closing on 4 January and is seeking the views of business owners and the public regarding the proposals.

“What we’ve seen over the years is that a lot of delivery drivers simply ignore the restrictions and drive into the pedestrianised zone at any time of day and this is obviously not safe and is an accident waiting to happen.

“We made some trial changes over the summer as part of the emergency measures required by Government in response to the Covid pandemic to change the times which vehicles could enter the zone. We’ve looked at it again, made some further refinements and are now proposing to introduce this permanent scheme.

“Signage alone has not been adequate and has been ignored. Controlling access to the zone will enforce the permitted times that delivery vehicles will be able to enter the zone. Of course, there will be exceptions for emergency vehicles and repairs etc.

“We want to hear what people think about this proposal and have launched a 6 week consultation to enable businesses and residents to provide feedback.”

The public can view full details of the proposals and have their say by visiting the council’s consultation hub.  Alternatively, comments can be emailed to: TROConsultation@wolverhampton.gov.uk  or in writing to: David Pattison, Director of Governance and Solicitor to the Council, Civic Centre, St Peters Square, Wolverhampton, WV1 1RG. 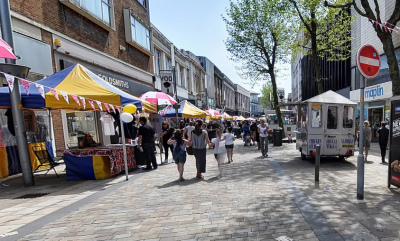