City of Wolverhampton Council will continue supporting the city’s foodbanks by extending the delivery of weekly supplies up to Christmas.

Ever since the start of coronavirus crisis, the council has been delivering emergency food parcels to various foodbanks in the city enabling them to continue feeding the growing numbers of people who rely on them.

The council today (Tuesday 13 October) announced it will continue to supply Wolverhampton’s foodbanks with 1,000 boxes of food a week until Christmas.

Foodbanks have been hit hard by coronavirus with many of their usual volunteers unable to help due to shielding, fewer donations and increased demand.

Leader of the council, Councillor Ian Brookfield said: “Looking after our own and helping our most vulnerable citizens has been the mantra of the council throughout this crisis.

“Whether that be the one million+ meals we delivered directly to people shielding at the height of the pandemic, or the weekly supplies of food we have continued to provide to foodbanks which do such amazing work to provide a lifeline to people in need.

“We have now decided to keep this support to foodbanks going for another 3 months because we know how much it is needed at a time when more people are losing their jobs because of the crisis and more people need help to put food on the table.”

One of the foodbanks to receive council support is run by the Elias Mattu Foundation in Penn Fields which delivers to almost 500 people across the city each week.

Councillor Asha Mattu, who set up the foundation and named it in memory of her late husband – former Mayor Elias Mattu – said: “A lot of people have no income coming in, they’ve lost their job because of the pandemic and are perhaps waiting 6 weeks for their Universal Credit to start – so they come to foodbanks like us because they’ve got nowhere else to turn.

“We have others who are shielding who don’t have family to ask to get their shopping and we help them as well.

“I get 200 boxes full of supplies delivered every week by the council, if it wasn’t for these weekly deliveries we would really be struggling to keep going. They are a lot of help.”

Caroline Price, project leader from another city foodbank, The Well, said: “Over the past 6 months, The Well has delivered food and toiletry parcels to 2,300 households, supporting 5500 people.

“The weekly donation of the council food boxes have been a great support in this work, not only to us, but to other projects we have shared them with.

“Sadly, we are expecting referrals to rise in the coming months, so the continuation of this support is really appreciated.” 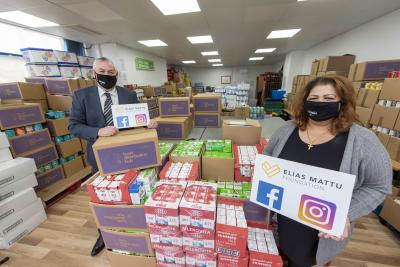