Wolverhampton’s own Commonwealth Games gold medallist, Hugh Porter MBE, has been unveiled as one of the Batonbearers for the Birmingham 2022 Queen’s Baton Relay.

Hugh, one of Britain's greatest former professional cyclists, was nominated to carry the Queen’s Baton to recognise his lifelong commitment to the sport.

As well as winning Commonwealth Games gold in 1966, Hugh also won 4 world titles in the individual pursuit – more than any other rider.

He was named Cycling Ambassador by City of Wolverhampton Council in 2021 to recognise his tremendous achievements.

In his ambassador role, Hugh acts as a figurehead for cycling in the city, helping to promote and support initiatives that show the council’s commitment to providing opportunities for residents to take up or continue cycling.

Hugh said: “It’s a great honour to be nominated and selected to carry the Baton through my home city of Wolverhampton. The privilege will leave me with many proud happy memories.

“Winning a gold medal for the 4,000m Individual Pursuit at the 1966 Commonwealth Games in Jamaica, was very special. The medal is in the mayor’s parlour along with the other gold medals I won as a professional cyclist.

“In August, the city will be hosting the start and finish of the cycling road time trials and it will be a golden opportunity for the people of Wolverhampton and surrounding areas, to see some of the world’s leading competitors. As the City’s Cycling Ambassador I can’t wait. Bring it on!”

Councillor Steve Evans, City of Wolverhampton Council’s cabinet member for city environment and climate change, said: “We’re absolutely thrilled that Hugh will be one of our Batonbearers when Wolverhampton hosts the Queen’s Baton Relay.

“Hugh and his wife Anita have always been fantastic sporting ambassadors for Wolverhampton and this great news is a well deserved recognition of Hugh’s ongoing commitment to promoting the benefits of cycling across all age groups.

“Birmingham 2022 Commonwealth Games will be a major event for our region and as we are hosting both the relay in July and the cycling Time Trial event in August, it will be a great way to show off our city.

“I’d like to encourage local residents and businesses to prepare for the Games by visiting the dedicated website for details about road closures, parking, public transport and other information you may need.”

Hugh will join other community Batonbearers from Wolverhampton including Parmi Dheensa, her son Callum, and Melvin Riley who were nominated for their activist work and Councillor Bhupinder Gakhal who was recognised for his work to create the city’s historic Saragarhi Monument.

The Baton will be dramatically parachuted in by helicopter on Sunday 24 July, before inspirational Batonbearers take it on a tour of the city – giving them the chance to highlight stories of how they are striving for change in their community.

Members of the public are encouraged to get involved with the arrival of the Baton, with further details of events and where to line the route to be announced over coming months on the Birmingham 2022 website.

For details on how the Games may impact residents and businesses, visit Get Set For The Games. 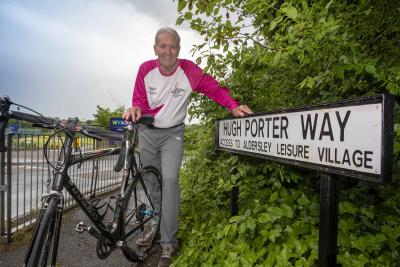