Commemorative stones are being laid at City of Wolverhampton Council new build housing sites to mark the historic 100th anniversary of council housing in Britain.

Work on 7, phase 4 developments under the council’s small site home building scheme have started in 2019 - and a property on each site will see one of the specially commissioned stones set into the brickwork.

Wolverhampton Homes, who manage the city’s council housing stock, have also been celebrating the milestone with a series of activities throughout 2019, and recently planted 100 trees on 20 sites across the city, as well as holding a special tea party in the Mayor’s Parlour for some of the city’s oldest residents.

“Since then our council housing build programme has grown year on year and we are delivering new homes on large and small sites across the city.

“The 100 year anniversary of council housing gives us cause to celebrate our work in the City of Wolverhampton and these commemorative stones across our sites will provide a constant reminder of what has been achieved to support the people of the city into housing.

“One of our key priorities is to increase the number of decent and affordable homes available in the city and the tenants in our properties are definitely benefiting from that.”

Shaun Aldis, Chief Executive of Wolverhampton Homes, added: “The commemorative stones will serve as a reminder of the impact of council housing to our great city for many years to come.

“Council homes play an important part in ensuring local people have access to secure and affordable housing. We continue to invest in council housing in Wolverhampton so that future generations have the same access to high quality homes.”
It has been a significant year for councils and social housing providers, as well as tenants and residents who use their services.

In 1919 Parliament, then overseen by Prime Minister Lloyd George, passed the Housing Act 1919, which later came to be known as the 'Addison Act', after Dr Christopher Addison, the then Minister of Health.

The Addison Act promised Government subsidies to help fund the building of 500,000 new council homes over a period of three years. PM Lloyd George was committed to providing quality homes fit for heroes returning from World War I. It was a highly ambitious promise, and one that never quite came to fruition; nevertheless, it paved the way for council housing in Britain for many years to come.

In November 1918, prior to the Addison Act, PM Lloyd George delivered a powerful speech to the people of Wolverhampton at the Grand Theatre. 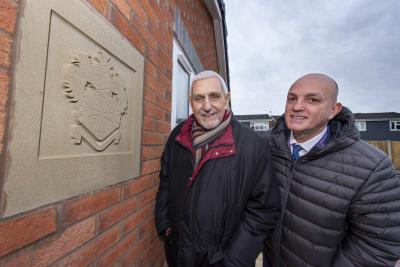 (l-r): Shaun Aldis, Wolverhampton Homes Chief Executive, and Councillor Peter Bilson, show off one of the commemorative stones in a new-build bungalow at Whiston Avenue, Ashmore Park. The bungalows were built on derelict land 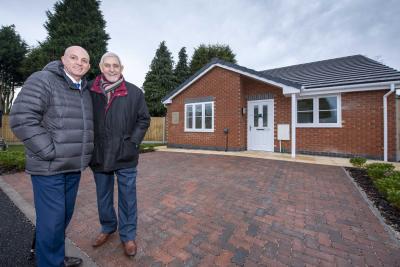