A commemorative plaque recognising the life and work of a former Bilston councillor has been unveiled in the area he knew and loved.

Tom Larkin was a councillor for Bilston East who served his community for a decade, holding office from 1973 to 1983.

He was fiercely proud of Bilston, championing a variety of local causes in his work as a councillor and supporting local charities with the sales of his history books, before he died last August at the age of 90.

As a councillor, Mr Larkin has been described as a ‘leading force’ in working to improve housing in both Bilston and Wolverhampton, inspired by his memories of growing up in the slums before the outbreak of the Second World War.

He was equally committed to striving for social justice, working to clean up air quality following the demolition of Bilston Steelworks in the 1970s and supportive of the fight for equality.

In addition, Mr Larkin was a noted local historian and author, writing a number of books about Bilston and the Black Country, and giving regular public talks about the history of the region and its political landscape.

It was unveiled at Bilston Town Hall today (20 July) in a service attended by members of Mr Larkin’s family, including his wife Emily, a former teacher at Stonefield School in Bilston, and his son Hugh.

Councillor Simkins said: "Tom was truly dedicated to the people of Bilston. His commitment was timeless and he was a real stalwart of the community. I was fortunate enough to know him for more than 20 years and I learned a lot from him.

“He was a mild mannered man who listened to others and was always keen to organise public meetings so he could learn the views of the people of Bilston.

“But he was also clear on what he believed and what he stood for. In his heart, there was always passion for Bilston and the Bilston people. I will miss him very much.” 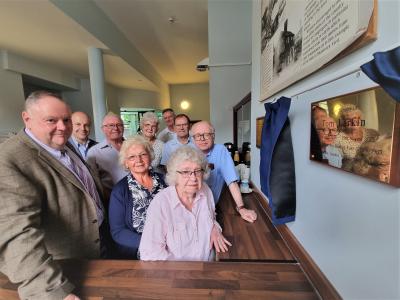