The iconic statues of Prince Albert and Lady Wulfruna are once again backing the campaign to Orange Wolverhampton and end inter-personal violence.

The statue of Queen Victoria's husband Prince Albert, which stands in Queen Square, and the founder of Wolverhampton, Lady Wulfruna, outside St Peter's Collegiate Church, are proudly sporting orange sashes in support of the annual 16-day campaign which began yesterday (Monday 25 November).

Kathy Cole-Evans, Chief Officer of Wolverhampton Domestic Violence Forum, said: "It's great that we are able to use both of these iconic statues to promote this very important campaign to the people of Wolverhampton.

“There were over 6,500 incidents of domestic violence recorded by police in Wolverhampton last year, with the vast majority of victims female, and this is a major issue that we all need to be aware of.

"But the Orange Wolverhampton campaign is not just about highlighting the problem; we want to ensure that victims do not suffer in silence and are aware of and feel able to get the help and support they need."

Anyone suffering from domestic violence, female genital mutilation, forced marriage, so-called ‘honour based’ violence, sexual violence, stalking or harassment, or knows someone who is, should call the relevant helpline: 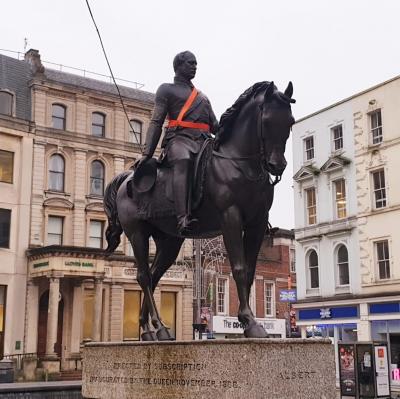