City of Wolverhampton Council will stand in solidarity with the people of Ukraine by raising the nation’s flag and playing its national anthem outside its headquarters.

The blue and yellow Ukrainian flag will be raised on the piazza outside Wolverhampton Civic Centre at 11am tomorrow (Wednesday 2 March) by the city’s Mayor, Councillor Greg Brackenridge.

Members of the city’s Ukranian community will be in attendance, alongside city councillors and members of the public can also attend.

The council will also display a ‘We Stand With Ukraine’ message on electronic road signs across the city.

Later on Wednesday, a meeting of the Full Council will be asked to vote on a motion which has cross party support. The motion will be worded as follows:

The City of Wolverhampton Council stands with and expresses its support for the people of Ukraine and the Ukrainian community in our City following the illegal invasion by the Russian State of the independent democratically elected sovereign Ukrainian nation state.

Mayor of the City of Wolverhampton, Councillor Greg Brackenridge, said: “It will be my honour to raise the flag of Ukraine and demonstrate our unity and solidarity with our Ukranian friends. I hope as many people as possible are able to attend the event and show their support for the illegal invasion of a democratic, sovereign nation and the killing of innocent people.”

Councillor Ian Brookfield, Leader of City of Wolverhampton Council, said: “Our city has a long established Ukranian community, I know they are going through unimaginable pain right now as their loved ones and friends are in danger from bullets and bombs in this illegal war.

“We are all observing with a mixture of great sadness and anger as the people of this free, democratic, sovereign country are being killed by the illegal actions of a foreign aggressor.

“We want to show our city’s solidarity with the people of Ukraine, it is important at times like this that all those in world who believe in freedom, democracy and the rule of law join together to oppose those who would seek to destroy those cherished values. We pray for peace.”

Councillor Wendy Thompson, Leader of City of Wolverhampton Council’s opposition Conservative Group, said: “The people of Ukraine are in all our thoughts right now as they go through a trauma caused be the illegal action of the Russian state.

“They have built a modern, outward looking sovereign state that is so different to the one that I visited during the Cold War where poverty was widespread.

“Whilst we cannot change what is happening in Ukraine, we can send a message of support and solidarity. Any place where people believe in freedom, democracy and the rule of law is a friend of Wolverhampton and this country.” 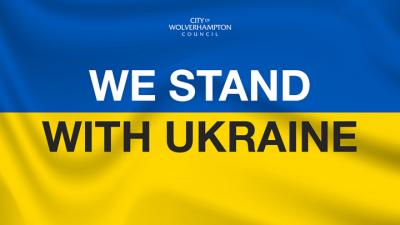