Individuals, organisations and community groups across Wolverhampton have created more than 15,000 ribbons to promote this year's Orange Wolverhampton safeguarding campaign.

Wearing an orange ribbon during the 16 day campaign, which is now underway, is an easy way for people to show their support for the city’s continuing drive to end domestic abuse, female genital mutilation, forced marriage, ‘honour-based’ violence, sexual violence, and stalking and harassment.

At the same time, they will be highlighting the fact that there is help and support available to victims, from both local and national organisations.

People have been busy creating the ribbons over the last few weeks, with ribbon-making sessions held across the city.

Councillor Jasbir Jaspal, the City of Wolverhampton Council's Cabinet Member for Public Health and Wellbeing, said: "Wearing an orange ribbon is a great way for us to all say ‘no’ to interpersonal violence and help raise awareness of the help and support available to victims and survivors in Wolverhampton.

"And it's just one way you can get involved with this year's Orange Wolverhampton campaign. We've already had a flag raising ceremony and awareness raising walk as well as a two-day pop-up stand at the Mander Centre, and individuals and organisations are sharing key messages from the campaign with others and holding a range of activities for people to join in with."

The Orange Wolverhampton campaign runs from Friday 25 November, the United Nations International Day for the Elimination of Violence against Women, until 10 December, UN Human Rights Day, and supports the UN Orange the World campaign to end violence against women and girls.

St George's Hub is holding an Orange Coffee Morning at Central Library today (Thursday) from 11am, as well as an online workshop for male victims of domestic abuse yesterday next Thursday, 8 December.

A programme of Lunch & Learn sessions are being delivered by a number of local organisations on a range of topics, and people taking part in the weekly Saturday morning Wolverhampton Parkruns at West Park and East Park have also shown their support. Full details of all events can be found at OrangeWolves.

This year's campaign will come to an end with the lowering of the Orange flag, on St Peter’s Square outside the Civic Centre, on Saturday 10 December at 4.30pm. There will be a minute’s silence in memory of all the lives lost to, or affected by, all the crimes associated with violence against women and girls, whilst also remembering that boys and men, people in same sex couples and transgender people are also affected by these crimes. The silence will be followed by a shared pledge to continue to work together to end such violence and to continue to offer support to survivors.

For more information and to sign up to this year’s campaign, please visit the Orange Wolverhampton website at OrangeWolves.

Anyone suffering from or affected by domestic violence, female genital mutilation, forced marriage, so-called ‘honour-based’ violence, sexual violence, or stalking and harassment (or knows someone who is) should call the relevant helpline: 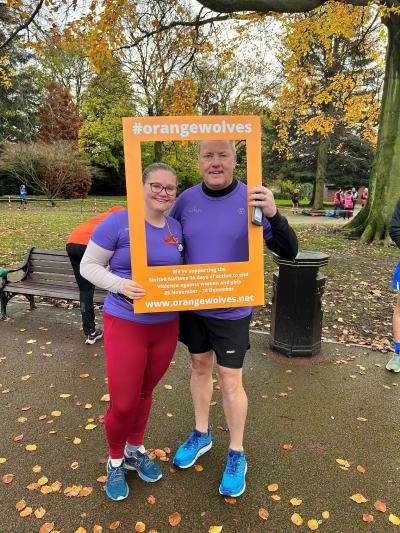