Children, young people and adults all showed their appreciation to those who have helped them through the Covid-19 pandemic on #YES Appreciation Day, which took place on Friday (5 March).

The day, proposed by young people from a range of city youth voice groups, gave youngsters the chance to say thank you to others for anything they may have done in the pandemic.

It also gave adults the opportunity to show their appreciation to children and young people who have gone the extra mile over the last year.

Those taking part came up with a range of creative ways to show their appreciation. The City of Wolverhampton Council’s Coproduction and Engagement Team received a range of messages from young people which were then shared on HeadStart Wolverhampton’s social media pages – @HeadStartFM on Twitter and Facebook.

Content included videos such as one from 15 year old Bethany, a pupil at St Edmund’s Catholic Academy and a member of the council’s SEND Youth Forum, who wanted to show her appreciation to her family, teacher and pets for helping her during the pandemic.

There was also a poem written by King’s CE School pupil David dedicated to keyworkers – in particular his dad, who has worked hard throughout the pandemic as a bus driver.

Schools from across the city also sent in pictures, paintings and written messages by pupils thanking those who have helped them, such as family members, friends and their teachers.

Adults also said thank you to young people for their actions during the pandemic including the council’s Chief Executive Tim Johnson who said that young people have “played their role as everybody in our city has” and that  “we look forward to young people importantly shaping the future and how we emerge out of the pandemic”.

Councillor John Reynolds, Cabinet Member for Children and Young People, said: “It was absolutely fantastic to see all of the creative work produced by our city’s young people to say thank you to those who have helped them most during the Covid-19 pandemic.

“A lot of people, young and old, have gone above and beyond since the pandemic began and it is only right that they are recognised on days such as #YES Appreciation Day.” 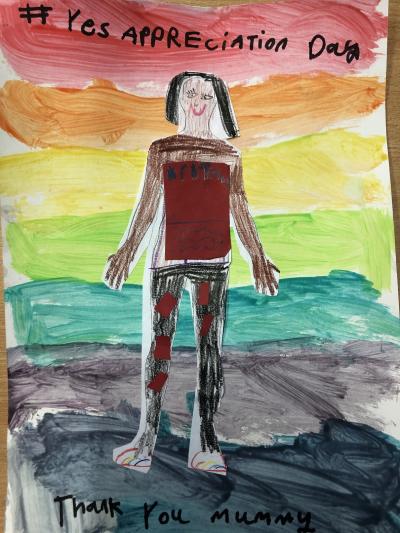 A drawing by a Year 2 pupil at St Michael’s CE Primary School, thanking their mum on #YES Appreciation Day