Former Olympic gymnast Kristian Thomas vaulted into a Wolverhampton school to share the power of sport and fitness with pupils.

The European Championship Gold and Olympic Bronze medallist, who is from Wednesfield, was joined by Commonwealth medallist Adrian Patrick on a visit to Woodfield Primary School in Penn on Thursday (13 February) as part of a Team Superschools event.

The pair joined pupils in fitness circuits in the morning, including sit ups, press ups and star jumps, before Kristian gave an inspirational assembly where he talked about his long and successful sporting career. He also showed pupils his bronze medal from the London Olympics, which he said was his favourite medal as he won it in front of his home crowd.

Headteacher Philip Salisbury says: "We were delighted to welcome Kristian Thomas and Adrian Patrick to our school, and our children really enjoyed spending the day with them.

"The purpose of the visit from Team Superschools was two-fold, for our children to meet famous athletes and get inspired to achieve and live a healthy lifestyle, and to help raise money for new PE equipment at our school in a fun, inspirational and exciting way, with children sponsored by their friends and family to take part in fitness activities.

"The event was all about fun, enjoyment and participation, with all children from Reception to Year 6 taking part. They were then able to put their questions to Kristian and Adrian and learn more about what it takes to be a top class sportsman."

Councillor Dr Michael Hardacre, the City of Wolverhampton Council's Cabinet Member for Education and Skills, said: "Kristian and Adrian are great role models for our children and young people, and it was fantastic they were able to spend the day with pupils at Woodfield Primary School."

Kristian Thomas was a member of the British team that won gold in the 2012 European Championships team event, and a historic bronze in the same event at the 2012 Summer Olympics. He won his first global individual medal – a bronze – in the 2013 World Championships, which was also the first global medal won in the vault by a British male gymnast. He then won his first major international title, gold in the floor exercise at the 2015 European Artistic Gymnastics Championships.

Adrian Patrick represented Great Britain at 1 outdoor and 2 indoor World Championships, winning the gold medal in the 4x400m relay at the 1994 Commonwealth Games in Canada. 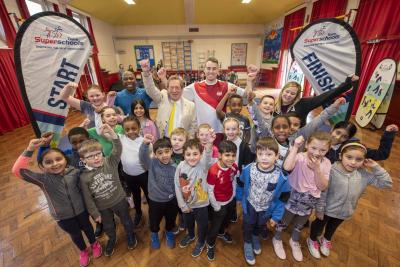