A city in mourning for Her Majesty The Queen

Wolverhampton is a city in mourning following the passing of Her Majesty The Queen at the age of 96 last week.

The Leader of the City of Wolverhampton Council, Councillor Ian Brookfield, said: "We have seen an outpouring of grief, not just in Wolverhampton and across the United Kingdom, but all around the world, following the death of Her Majesty The Queen on Thursday.

"We are now in a period of national mourning, and people are marking their respects in many different ways.

"We have opened books of condolence at the Civic Centre, at WV Active Bilston-Bert Williams, and at Tettenhall and Wednesfield libraries for people to leave their personal tributes to Her Majesty The Queen.

"If you can't get down to any of these locations, you might want to sign an electronic book of condolence which is available online at The Royal Family.

"If you wish to leave floral tributes, these can be placed at the Cenotaph in St Peter's Square in the city centre, the Memorial Garden off Oxford Street in Bilston, the Garden of Remembrance on Church Street, Wednesfield, or at St Michael & All Angels Church in Church Road, Tettenhall.

"It was good to see so many local residents join us for the Proclamation of Accession of King Charles III outside St Peter's Collegiate Church yesterday lunchtime, led by the Mayor of Wolverhampton and the Deputy Lord Lieutenant for the West Midlands. This was followed by the lowering of the Union Flag outside the Civic Centre, which will fly at half mast for the remainder of the period of mourning.

"We also know that people will doubtless want to get together with friends and family for Her Majesty's funeral, which will take place on Monday 19 September and has been declared a Bank Holiday. We are planning to show the service on a big screen in the city centre, so that we can all come together as one city, and one nation.

"Clearly, while we are in a period of national mourning, a number of scheduled activities have had to, or will be, cancelled or rearranged. We saw at the weekend that many sporting fixtures were postponed, including the entire football programme, along with a number of other events due to take place in the city.

"We are working through a list of events planned over the coming week or so to ensure they can be consistent with the period of mourning, and as a council we have taken the decision to postpone all formal council meetings, including Full Council which was scheduled to take place on Wednesday. Civic Sunday has also been postponed."

You can view photos at of the local Proclamation of Accession of King Charles III and images of the wreath laying and floral tributes that followed at Flickr. 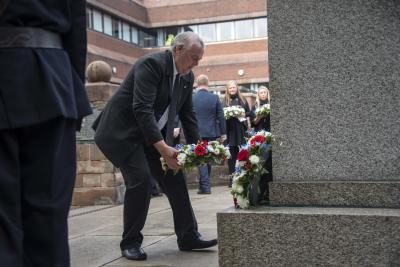