Wolverhampton's status as a Fairtrade city has been renewed once more - just in time for Fairtrade Fortnight which begins today (Monday 25 February, 2019).

It demonstrates the commitment of local organisations and individuals to help farmers and producers in developing countries by ensuring they get a fair price for the goods they produce.

"To achieve this, we had to demonstrate the work we have been doing to engage with local businesses and organisations such as churches and schools, with the City of Wolverhampton Council, local councillors and the city's MPs and with our flagship Fairtrade employer, the University of Wolverhampton.

"We received some really positive feedback from the Fairtrade Foundation, with it commenting on our 'amazing drive to ensure Fairtrade becomes part of the daily life in Wolverhampton', and they were also impressed with the 'numerous stakeholders, businesses and local organisations' we have involved in our work."

The renewal of Fairtrade status was celebrated at an ethical Fairtrade breakfast, part of Wolverhampton City Fairtrade Partnership's Annual General Meeting at the University of Wolverhampton earlier this month. It was attended by representatives from groups and organisations from across the city, as well as MPs, councillors and the Mayor of Wolverhampton, Councillor Phil Page.

He said: "Fairtrade offers a very practical way of helping people build a better life for themselves and their families and earn their way out of poverty. We'll be using Fairtrade Fortnight to raise awareness of Fairtrade products and encouraging local residents, visitors and businesses to switch to Fairtrade wherever possible."

The theme for this year's Fairtrade Fortnight is "She Deserves a Living Income", with the focus on cocoa, so organisers are promising lots of chocolate related goodies. As such, Wolverhampton's Fairtrade shop, on School Street, is offering 10% off Divine, Traidcraft and Seed & Bean chocolate bars throughout Fairtrade Fortnight, as well as free hot drinks on Friday and Saturday, 1 and 2 March.

There will also be an art competition for schools, as well as the annual Fairtrade church service for pupils. 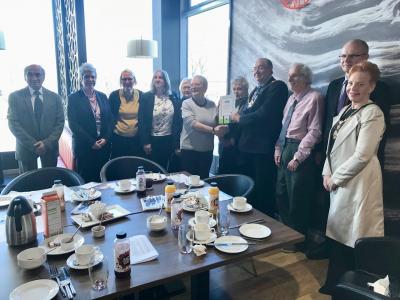