Wolverhampton's Grand Station hosted the launch of a new international project to bring together Commonwealth nations to share expertise in organ donation and transplantation, ultimately saving more lives, this week.

NHS Blood and Transplant's Commonwealth Tribute to Life Project is the culmination of 3 years’ work and represents a huge step towards obtaining health equality, both within the UK and the Commonwealth.

It provides a framework for the sharing of knowledge and expertise to increase ethical organ donation and transplantation. It seeks to further health equality for the benefit of all Commonwealth citizens.

Countries are pledging to sign a Memorandum of Understanding that will take effect at the start of the 2022 Birmingham Commonwealth Games, with 42 of the 54 countries making the pledge so far.

Mark Taylor, the City of Wolverhampton Council's Deputy Chief Executive, was among those in attendance at the virtual launch event, held on Commonwealth Day on Monday (14 March, 2022).

He said: "I was delighted to be able to represent the council at this important event. This is an official legacy project of Birmingham 2022 Commonwealth Games and presents a unique opportunity to increase levels of organ and tissue donation and transplantation globally."

In the United Kingdom, 6,230 people are waiting for an organ transplant, of whom around 32% are from a Black, Asian, Mixed or Other ethnic minority background.

Mark added: “Through sharing knowledge and awareness around organ and tissue donation and transplantation, Commonwealth nations can work together to save and transform the lives of thousands of patients, and I would urge people from all communities, but especially those from ethnic minority backgrounds, to discuss organ donation and make the life saving choice to become a donor."

Former Black Country GP Dr Satya Sharma MBE, Deputy Lord Lieutenant of the West Midlands, Chaired the project and praised its success at its launch. He said: “The 2022 Commonwealth Games are committed to bringing people together and celebrating the diversity of both the West Midlands and the Commonwealth.”

He added: “Wolverhampton is the birthplace of the organ donation register. All communities could take pride in by registering and discussing their wishes with the families to support the humanitarian project.”

The Memorandum of Understanding will come into force just before the start of the Commonwealth Games during July 2022. 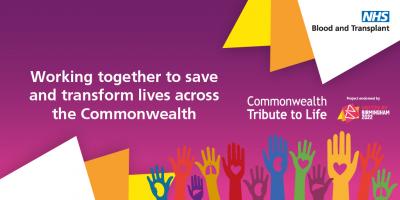 Wolverhampton's Grand Station hosted the launch of a new international project to bring together Commonwealth nations to share expertise in organ donation and transplantation, ultimately saving more lives, this week