City to come together to mark Remembrance Sunday

City of Wolverhampton will come together to mark Remembrance Sunday with a service at the Cenotaph in St Peter's Square this weekend.

The City's annual Observance of Remembrance will be held on Sunday (10 November, 2019), beginning with a parade led by the Band of the West Midlands Fire Service and comprising detachments of the military past and present and community groups.

The parade, which will feature representatives from 4th Battalion the Mercian Regiment, RAF Cosford, HMS Forward, 210 Battery, 103 Regiment Royal Artillery, cadets and veterans, will move off from Wulfruna Street at 10.35am.

A two-minute silence will be observed at 11am, followed by a traditional drumhead service outside and a second service inside St Peter's Collegiate Church.

Mayor of Wolverhampton Councillor Claire Darke said: “The annual Observance of Remembrance is an opportunity for the people of Wolverhampton to pay tribute to the men and women of our Armed Forces, past, present and future.

“Everyone is invited to watch the parade and attend the service to pay tribute to the fallen servicemen and servicewomen of all conflicts.”

People can also attend the service at St Peter's Collegiate Church, however please note that seating will be limited.

Meanwhile, on Saturday (9 November) City of Wolverhampton will also commemorate the Dutch soldiers stationed at Wrottesley Park during the Second World War at the annual Dutch War Graves Service of Remembrance.

The service, organised by the Royal British Legion City of Wolverhampton Central Branch, will take place at Merridale Cemetery on Jeffcock Road beginning at 10am.

The Princess Irene Brigade was stationed in an encampment at Wrottesley Park from 1941 before they took part in the Normandy D-Day landings which began the liberation of Western Europe. They were also the first Allied troops to enter The Hague.

The Brigade was disbanded in 1945 and former members were granted Freedom of the City of Wolverhampton in 2006.

On Monday 11 November there will be a service at the Cenotaph, St Peter’s Square, at 11am marking the exact moment the guns fell silent ending the bloodshed of the First World War. 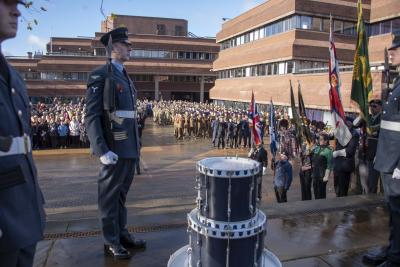 The City's annual Observance of Remembrance will be held on Sunday (10 November, 2019), beginning with a parade led by the Band of the West Midlands Fire Service and comprising detachments of the military past and present and community groups