They will be joined by Chase from kid’s TV favourite Paw Patrol, Father Christmas and the Mayor of Wolverhampton, Councillor Greg Brackenridge, to begin the city’s official countdown to Christmas.

There will be fun for all the family at the free event, hosted by local radio favourite Dicky Dodd, which runs from 3pm to 7pm, with the switch on itself taking place at 6pm.

Other performances during the evening will include Hit The Dhol, Chris Westwood and Marquis Drive.

There will also be real reindeer which people can meet, pet and have their photo taken alongside.

Anyone attending the event is advised that the city centre is likely to be very busy on Saturday afternoon and evening with a Wolves home game and people catching shuttle buses to attend the Grand Slam of Darts at WV Active Aldersley. They are therefore advised to consider using public transport to travel in and out of the city centre and if people do opt to drive, then they are advised to leave plenty of time for the journey and to find somewhere to park.

Mayor of Wolverhampton, Councillor Greg Brackenridge, said: “The Christmas lights switch on marks the official countdown to Christmas and it is wonderful to once again be welcoming people back to attend what promises to be a fantastic evening of free fun for all the family.

“There’s something for everyone with a great line up of performers and the kids will love to see Chase from Paw Patrol, Father Christmas and the real reindeer.

“I hope as many people as possible head out to see the show and give their backing to our city centre traders this Christmas.”

Switch ons will also be taking place in district centres across Wolverhampton the following week. They will all be hosted by Dicky Dodd and run from 4.30pm to 7pm with the actual switch ons taking place at 6.30pm.

At the Wednesfield event in High Street on Thursday 25 November, where switch on duties will be done by the Mayor and Father Christmas, there will be performances from Hit the Dhol and Chris Westwood.

At the Bilston event in Church Street on Friday 26 November, where switch on duties will be done by the Mayor, Father Christmas and local Olympic boxer Ben Whittaker, there will be real reindeer and performances from Hit the Dhol, Chris Westwood and Tony T.

At the Tettenhall event on Upper Green on Saturday 27 November, where switch on duties will be done by the Mayor, Father Christmas and local young fundraiser extraordinaire Louis Johnson, there will be a performance from Hit the Dhol.

At the Bantock Park event on Sunday 28 November, where switch on duties will be done by the Mayor and Father Christmas, there will be a performance from Hit the Dhol. 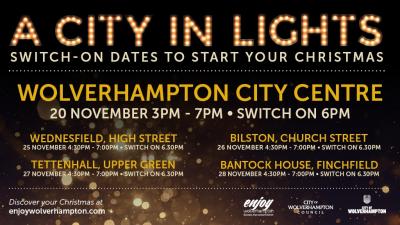