Celebrating the achievements of city’s young people in care

Hundreds of young people in care in Wolverhampton showcased their talents at an inspirational awards celebration.

The annual I Awards, held at Molineux Stadium on Friday night (5 April), celebrated the efforts of Wolverhampton's children and young people in care and care leavers and recognised their hard work and success in a range of categories over the last 12 months.

More than 400 children and young people were invited to collect awards in recognition of a wide range of achievements, from doing well at school to getting involved in their local community and overcoming challenges in their personal lives.

The I Awards also celebrated success in creativity and art and recognised the achievements of care leavers who are taking the next steps in their lives.

There were three ‘Inspirational Award’ winners who have demonstrated incredible bravery and resilience in dealing with situations that even adults would have found challenging.

These included saving the life of their foster carer by calling an ambulance after they suffered a cardiac arrest in the middle of the night; nursing their mother through a stroke and subsequently going on to do some outstanding work for stroke awareness; and dealing with the death of their brother in extremely tragic circumstances but despite this continuing to do well at school.

The event was hosted by Dicky Dodd from Signal 107 and attended by former Wolves goalkeeper Matt Murray who was placed in care as a baby and went on to be adopted. Matt spoke about his experiences growing up and gave some inspirational words of advice to the young people attending.

Emma Bennett, the City of Wolverhampton Council’s Director of Children’s Services. said: "I am extremely proud of the achievements of children and young people in care in Wolverhampton, and the I Awards are a great way for us to encourage them to aim high and reward them for their hard work.

"It's also a fantastic opportunity for the young people themselves to celebrate their successes with their foster carers and support workers.

"Many children in care will have previously gone through a very difficult period in their young lives, and so it's all the more important that we celebrate their success.

"We heard some moving stories of achievement which, coupled with the invaluable support of their carers, has enabled our young people to achieve in many different ways.

“The event was also a chance for us to say thank you to our many foster carers, who do such a good job looking after children in care, and I'd encourage anyone who is interested in becoming a foster carer to visit Fostering for Woverhampton or call us on 01902 551133.” 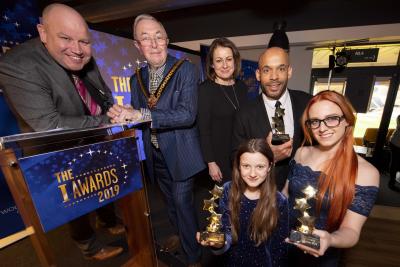