Books of condolence have been opened in Wolverhampton to enable people to pay their respects to Her Majesty The Queen, who sadly passed away yesterday afternoon.

There are 4 books of condolence, at:

A national book of condolence is available at Book of Condolence. Meanwhile, floral tributes can be left at the Cenotaph in St Peter's Square in Wolverhampton, the Memorial Garden, off Oxford Street, Bilston, the Garden of Remembrance, Opposite St Thomas's Church, Church Street, Wednesfield, and St Michael & All Angels Church, Church Road, Tettenhall.

Mayor Councillor Samuels said: "It is with profound sadness that we learned of the death of Her Majesty The Queen yesterday evening and, on behalf of the council and the people of the city of Wolverhampton, we extend our sincere condolences to the Royal Family at this sad time.

"Queen Elizabeth II was the longest reigning monarch in British history and the world's oldest head of state. Her death will be deeply felt throughout Wolverhampton, the country, the Commonwealth, and by people around the world.

"As we mourn, we have opened books of condolence at locations around the city so that residents can pay tribute to Her Majesty, a monarch without equal who leaves a great legacy after a life of extraordinary dedication and service."

On her death, the Queen's eldest son and heir, Charles, the former Prince of Wales, has become King Charles III of the United Kingdom and 14 Commonwealth realms. 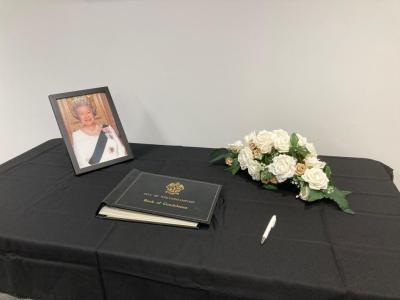 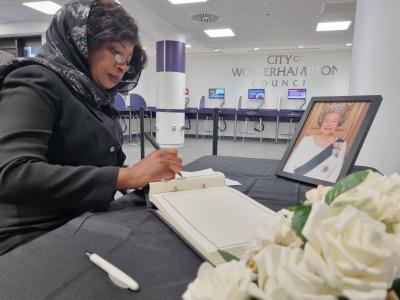 Pictured signing the Book of Condolence at the Civic Centre this morning is Leader of the City of Wolverhampton Council, Councillor Ian Brookfield 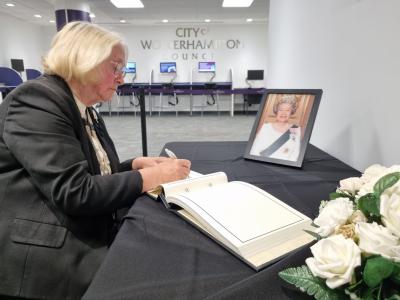 Pictured signing the Book of Condolence at the Civic Centre this morning is Leader of the Conservative Group, Councillor Wendy Thompson

Pictured signing the Book of Condolence at the Civic Centre this morning is Chief Executive of the City of Wolverhampton Council, Tim Johnson