The Best of Bilston celebrated in glittering awards ceremony

Bilston’s most inspirational individuals and community groups have come together to celebrate the Best of Bilston 2019.

Led by community members of HeadStart Wolverhampton’s Bilston Steering Group, the Best of Bilston awards recognised the contributions of those living, working or actively involved in the Bilston area.

A total of 18 inspirational individuals and local community groups were celebrated in an awards evening designed to foster community cohesion.

The 7 Young People Awards were sponsored by HeadStart Wolverhampton and celebrated the achievements of 10 to 16 year olds who encourage positive emotional wellbeing in their schools, community and among their peers.

The highly anticipated Inspirational Young Person Award was presented to Noah Bailey-Maloney who showed incredible bravery after being diagnosed with a spinal tumour. Despite experiencing nerve damage, Noah is very active in his local community and is a valued member of the Scouts and Boys Brigade.

As well as the awards, a number of community groups were presented with National Lottery funding. Earlier this year, HeadStart’s mini ambassadors asked local community groups in Bilston to bid to win up to £1,000 of National Lottery Community Fund money. After listening to applicants’ pitches in a Dragons’ Den-style event, the young volunteers aged 10 to 13 selected 6 successful winners who were presented with their cheques at the Best of Bilston Awards evening.

Emily Donavon, Chair of HeadStart Wolverhampton’s Bilston Steering Group, said: “I would like to thank the members of the HeadStart Steering Group for their hard work and commitment in making the Best of Bilston Awards 2019 a glittering success, and give a special mention to our sponsors HeadStart Wolverhampton, West Midlands Fire Service, Bilston Magazine and Gazebo Theatre in Education.

“I would also like to thank the Ormiston South Wolverhampton & Bilston Academy for hosting the awards evening. Finally, the awards evening would not have been possible without the support of the local community of Bilston coming together to make the Best of Bilston Awards 2019 a huge success.”

Andrew Wolverson, the City of Wolverhampton Council’s Head of Service for People, said: “The Best of Bilston Awards are a true celebration of community spirit, bringing together young people, families, volunteers and local businesses. Congratulations to all the winners and nominees on their much deserved awards and success, and a huge well done to the Dragon’s Den winners too who have won a pot of National Lottery funding.”

HeadStart Wolverhampton, part of a £56 million National Lottery funded programme set-up by the National Lottery Community Fund, is designed to improve the emotional mental health and wellbeing of children and young people aged 10 to 16 by giving them the skills they need to cope with the challenges of modern life.

As well as running a series of specific programmes in its four key target areas, HeadStart Wolverhampton offers city wide help through a Support and Guidance Directory which provides emotional mental health and wellbeing resources from different organisations, including information targeted at young people, parents and carers, and professionals. 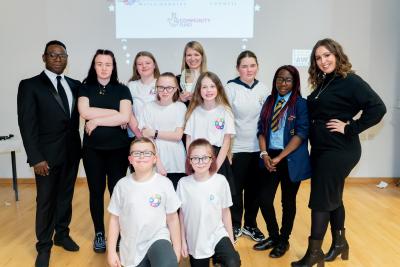 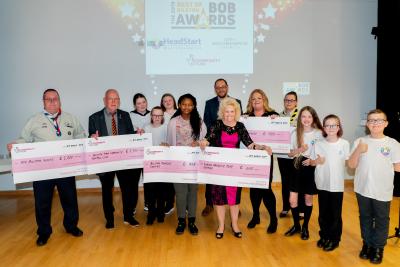 Some of the winners of Bilston’s Dragons’ Den are awarded their cheques by John Goodman, The National Lottery Community Fund Midland Funding Officer (back, centre) and HeadStart’s mini ambassadors