Beat the Street Wolverhampton was a free walking, running and rolling game designed to increasing physical activity levels and to improve health and wellbeing among children and adults of all ages. It also aimed to reduce car use by encouraging more active forms of travel.

Participants were invited to complete a survey on their levels of physical activity both before and after the game to measure the impact of the initiative.

Results highlighted how the game increased activity levels amongst families with 65% of less active children and 68% of inactive adults becoming more active. Participants reported improved mental wellbeing and said it was a fun way to spend time with family and friends.

Councillor Jasbir Jaspal, the City of Wolverhampton Council’s Cabinet Member for Public Health and Wellbeing, said: “Not only did the game prove to be an effective way of helping people make small lifestyle changes such as increasing the levels of daily physical activity, but Beat the Street Wolverhampton also provided a fun activity for families to do over the summer holidays.

“Children received a fun pack with activities that aimed to help them explore Wolverhampton on foot and by bike and to really get to know their local parks, green spaces, historical sites and cultural venues.”

Councillor Beverley Momenabadi added: “It was truly wonderful to see so many youngsters out and about taking part in Beat the Street and completing the challenges whilst getting active.

“So many schools were involved in the initiative which really created a sense of involvement for the children, and I would like to say a big well done to everyone who organised and took part in Beat the Street.

“We hope that this type of event has highlighted how much fun it is to stay active, and I would encourage people to try to make the most of all of the beautiful open green spaces we have available in Wolverhampton and continue to enjoy physical activity”.

Beat the Street was a Yo! Activity, organised by City of Wolverhampton Council and WV Active, with funding from the National Lottery via Sport England. It is delivered by Intelligent Health. A 6 month follow up survey will be sent out to players in December, which will look at long term behaviour change. 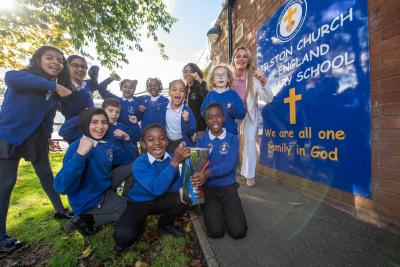