Major sections of barriers have come down in time for Christmas and New Year as city centre transformation works enter the final leg.

City of Wolverhampton Council has listened to traders’ concerns and reduced the barriers to only small areas of Victoria Street, making pedestrian access to businesses easier.

Contractors Eurovia, who are carrying out the £15.7million city centre improvement works on behalf of City of Wolverhampton Council, will pause activity over the festive period and will return to Victoria Street in early January to complete the works by February, subject to weather conditions. They have already finished works in School Street and Salop Street.

Works are also nearing completion on North Street with the road now reopen to traffic from the Civic Centre Car Park exit (vehicles leaving the car park can now use this exit) to Darlington Street, while Exchange Street and Cheapside have also returned to use and will temporarily run in a one-way direction from Queen Square to North Street (Cheapside disabled parking bays are open for use).

Final works will take place during January and February with the rest of North Street then set to reopen to traffic.

The works - funded from the Government’s Future High Street Fund - are designed to support businesses by better connecting the west of the city centre, improving the public environment, and creating events spaces, such as a new public square where Victoria Street meets Skinner Street and Bell Street.

The carriageway on North Street has been moved closer to the Civic Centre creating a wider, safer area for gathering crowds in front of the new-look The Halls Wolverhampton entertainment venue. The changes will also include a new designated cycle route through North Street, linking to new and improved cycling facilities on the Ring Road. A new carriageway link between Paternoster Row and North Street is also being constructed to help traffic flow around the halls.

Cabinet Member for City Environment and Climate Change, Councillor Steve Evans, said: “The team has done a tremendous job to progress works to this stage and enable us to reopen large areas over the festive period and beyond to support businesses.

“We can look forward to the final push and completion of these transformational works early in the New Year – delivering long-term benefits for businesses, residents and visitors to our city centre.

“We appreciate that while the works have been taking place it has been challenging for many businesses and I’m pleased to say that the first five businesses who have shown evidence of a loss due to the works have received an initial support payment. The assessment process is continuing with other businesses in the city centre works area.

“Ultimately, we want people to enjoy our city centre from the moment they arrive. The public realm improvements will create fantastic public spaces where people will want to spend time, spend money in local shops or enjoy new city centre events. It will be much more attractive and inviting, which will help to drive more footfall on this side of the city centre.”

The next phase of the transformation works is also set to start early in the New Year with the demolition of vacant shops at 1-7a Cleveland Parade on Cleveland Street to make way for a new social hub in the city centre - Bell Place Box Space - offering the best in street food, drink and entertainment. 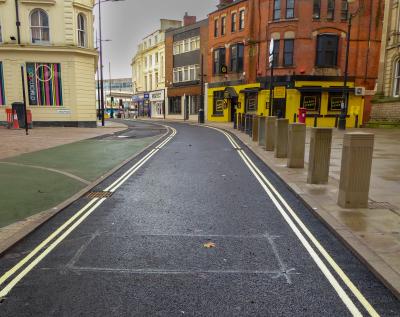 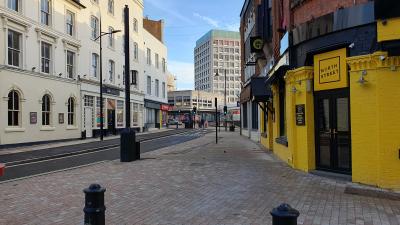 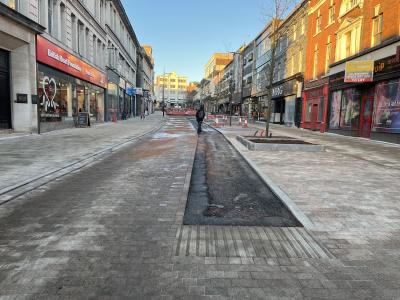 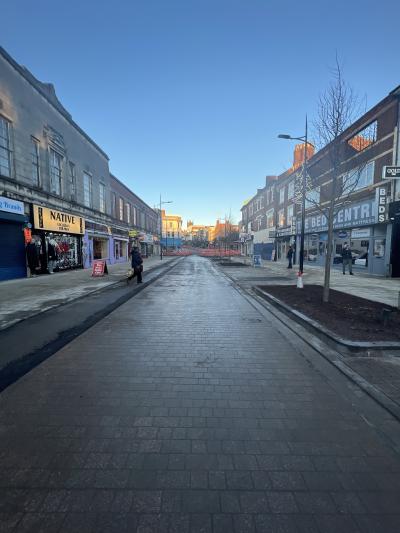