The 4 Black Country councils and West Midlands Police will appear before the High Court in London tomorrow (Tuesday 20 December, 2022) to apply for an interim injunction to ban "street racing" across the region.

If the application is successful, the interim injunction will prohibit people from participating in, attending, promoting, organising or publicising a street racing event, also known as car cruising, anywhere within the boroughs of Wolverhampton, Dudley, Sandwell or Walsall.

Anyone breaching the injunction could be arrested, face penalties such as up to years' imprisonment or an unlimited fine, or have their assets seized.

For the purposes of the application, street racing is defined as the act of drivers of cars, motorbikes or quadbikes meeting to race or show off in their vehicles.

A fixed term injunction had previously been in force in the Black Country between 2015 and 2021, and helped dramatically reduce instances of street racing across the region in that time. However, there has been a noticeable rise in street racing activity since then.

The new application is being led by the City of Wolverhampton Council on behalf of the Black Country councils and West Midlands Police. It will be heard by The Honourable Mrs Justice Hill at The Royal Courts of Justice Strand, London WC2A 2LL, tomorrow at 10.30am.

Councillor Jasbir Jaspal, the City of Wolverhampton Council's Cabinet Member for Public Health and Wellbeing, said: "We are pleased to be returning to the High Court in London on Tuesday to seek a temporary injunction against street racing in the Black Country.

“Street racing, also sometimes described as car cruising, is noisy, dangerous and illegal and some events have resulted in serious injuries and even death.

"The previous Black Country wide injunction proved incredibly effective in reducing instances of street racing across the region. However, the problem has begun to return to our streets again since the original injunction expired.

"It is important that the authorities have the powers they need to crack down on street racing as and when it occurs and so we are naturally hopeful that we can secure interim injunctive relief tomorrow."

For more information, including full terms of the proposed interim injunction, power of arrest and documents and evidence in support of the application, please visit Street racing injunction application.

People are invited to submit comments and observations regarding street racing and the application for the interim injunction by emailing litigation@wolverhampton.gov.uk. Evidence may be used in court.

Incidents of street racing should be reported via asbu@wolverhamptonhomes.org.uk or to West Midlands Police on 101. In an emergency, always dial 999.

Anyone who wishes to participate in the substantive proceedings for application injunction and power of arrest, which will take place on a date to be decided by the Court next year, must file at court and send to the Claimant (Wolverhampton City Council) a document known as an Acknowledgment of Service by 4pm on 20 January, 2023. The Acknowledgment of Service (Part 8) claim form can be found on the Court Service’s website. 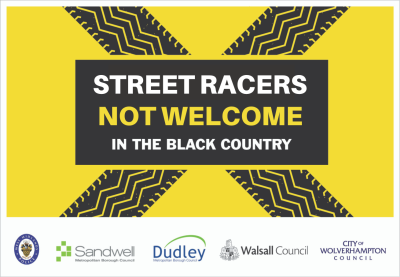 The 4 Black Country councils and West Midlands Police will appear before the High Court in London tomorrow (Tuesday 20 December, 2022) to apply for an interim injunction to ban "street racing" across the region