The hearing into an application for a new car cruising injunction for the Black Country has been adjourned today (Thursday 13 May).

The applicants – the City of Wolverhampton, Dudley, Sandwell and Walsall councils and West Midlands Police – took the decision to apply for the adjournment following the conclusion of a separate High Court hearing relating to a number of injunctions which, similar to the proposed car cruising injunction, are served against 'persons unknown'.

The applicants are reviewing the judgment handed down in that case to determine what impact, if any, it would have on their application for an injunction banning car cruising in the Black Country.

David Pattison, the City of Wolverhampton Council's Director of Governance, said: "We are of course disappointed to have had to adjourn today's hearing but, in the light of judgment being reached in another case relating to injunctions served against persons unknown, it is right that we take time to review any ramifications it may have on our application.

"The car cruising injunction, first introduced in 2015, has proved incredibly effective in tackling this menace on our roads, but we know that the problem still persists in some hotspots.

"Across the Black Country, local councils and the police continue to receive complaints about dangerous driving, execessive noise, litttering and people and vehicles obstructing highways and residential or business properties.

“Law abiding drivers can also end up feeling intimidated when they inadvertently find themselves in the middle of a street race.

"It is important that the authorities have the powers they need to crack down on car cruising as and when it occurs, and we hope to be able to return to the High Court in the near future with our application for a new car cruising injunction for the Black Country.

"In the meantime, the message remains that car cruisers are not welcome in our region – and we continue to urge people to report any incidents to the police."

Incidents of car cruising should be reported to West Midlands Police on 101. In an emergency, always dial 999. 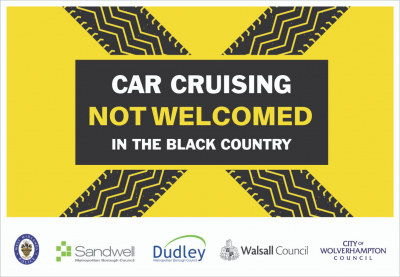