A local resident has been sentenced to 14 months imprisonment for selling illegal and counterfeit cigarettes and tobacco at his home address.

Yesterday, (11 April, 2019) Peter Butler, from Bushbury North, was sentenced to 14 months in prison and ordered to pay £6,000 in court costs by Wolverhampton Crown Court.

Through use of the Proceeds of Crime order, the City Council can request Mr Butler to reimburse taxpayers £39,000 - the amount of benefit he gained from his criminal activity if he ever comes into any money.

In February 2018, Butler was caught red handed after an estimated £40,000 worth of fake goods were found being stored in garden sheds, bedrooms and the living room at his property during a Trading Standards operation.

A shocking variety of fake and genuine cigarettes - which have avoided UK duty were found to being sold ¬illegally at the property.

Along with West Midlands Police, a trademark expert and specialist search dogs, the team inspected the entire property to search for hidden tobacco.

Over 70,000 counterfeit cigarette and tobacco packets and were seized and taken for further examination.

Paul Dosanjh Trading Standards Service Lead at City of Wolverhampton Council said: “Selling and supplying counterfeit tobacco is a serious crime that not only robs the public purse of much needed revenue, but also poses a real threat to public health.

Selling these products brings unwanted organised crime into our communities and undermines our efforts to discourage smoking.

“I hope today’s outcome sends out a warning to those who continue to fund this criminal activity, that we are serious about clamping down on the sale of these illegal and dangerous products.

"I encourage anyone who knows of illegal tobacco being sold to report it, so we can work together to tackle this issue, and to prosecute offenders." 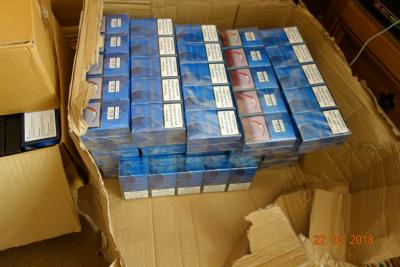