Wolverhampton Art Gallery to host Where is Home?

Wolverhampton Art Gallery is set to stage an exhibition telling the story of South Asian migration to the city after 2 major historical events.

Where is Home? is free to view at the Lichfield Street venue from Saturday, 9 July to Monday 29 August.

It showcases South Asian migration to the UK - marking the 75th anniversary of Indian partition and the 50th anniversary of expulsion of South Asians from Uganda – and will look first hand at those people directly affected by these seismic cultural shifts, exploring their origins.

Contributions come from notable artists and curators Alnoor Mitha, Amani Mitha, Jai Chuhan, Jasmir Creed, Saima Rasheed and John Lyons, all of whom feature the themes of migration and belonging in their work.

Local community groups have also contributed to the project, with first and second generation South Asian and British Asian people discussing what ‘home’ means to them, in the context of post imperial Britain.

Personal objects donated to the project will feature in the exhibition, including a passport, prayer mat and rosary beads. Each item has been chosen as something instantly recognisable to a South Asian visitor.

City of Wolverhampton Council Deputy Leader and Cabinet Member for City Economy, Councillor Stephen Simkins, said: “In Wolverhampton we have so many stories to tell, and it is fantastic to see that these significant events are being highlighted and stories told to city residents, visitors and future generations.”

Alnoor Mitha, Senior Research Fellow at Manchester School of Art, Manchester Metropolitan University, added: “Where is home? For many Asian communities, this is a simple question with a complicated answer. I was born in Uganda but have made my home here in the UK; my children were born and have always lived here but still face racism from those who do not see them as British.

“Through this exhibition we examine the idea of home, asking what it really means. We bring in the complex history of Britain and the South Asian diaspora and hear the voices of artists and everyday South Asian people.”

Jiten Anand, Director of Inspirate, said: “Our exhibition marks 2 major turning points in global history: the 1947 partition of India and Pakistan, and the expulsion of South Asians from Uganda in 1972. Both events caused thousands of people to settle in the UK, notably in Leicester, Wolverhampton, Birmingham, Manchester and London – the cities in which we present Where is Home? We are seeking to unpick the impact of this migration, both on the people involved, the communities into which they settled, and on their children and grandchildren.”

In addition to the exhibition, a first of its kind interactive online resource is available for people to learn more about the history of South Asian migration to the UK. Developed by Dr Vimal Patel, Senior Researcher and Lecturer in History at De Montfort University, Leicester. The resource tells the story of global migration, from the abolishment of slavery and start of indentured South Asian labourers in the 1830s, through the major twentieth century milestones to the present day.

Where is Home? has been produced by Inspirate, a Leicester based arts organisation that has produced culturally dynamic arts experiences for over 500,000 people across the UK. Visitors to the exhibition can also be involved in a host of related events, including live performances from Sampad Arts in Birmingham, a Q&A with author Neema Shah in Wolverhampton and a day of festivities in London. More information can be found at Where is Home.

Where is Home? will also feature displays and events across partner venues: Leicester Museum and Art Gallery; mac Birmingham, Whitworth Gallery (Manchester) and the Migration Museum (London). The Birmingham and Wolverhampton exhibitions are presented as part of the Birmingham 2022 Festival. 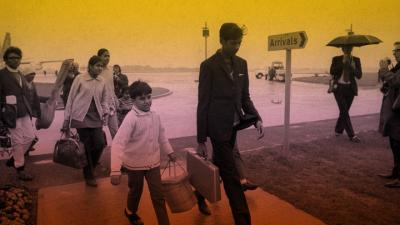 Exhibited and created by An Indian Summer as part of the Birmingham 2022 Festival. The exhibition marks the 75th anniversary of Indian partition and the 50th anniversary of the expulsion of South Asians from Uganda