The annual campaign, coordinated by Wolverhampton Safeguarding Together, the Safer Wolverhampton Partnership, Wolverhampton Domestic Violence Forum and the City of Wolverhampton Council, supports the United Nations’ Orange the World campaign to end violence against women and girls.

In doing so, they are raising awareness of the issues of domestic violence, female genital mutilation, forced marriage, so-called ‘honour based’ violence, sexual violence, stalking or harassment, and the help and support which is available to victims from local and national organisations.

For more information of this year's campaign, and details of how to get involved, please visit the Orange Wolverhampton website or follow the campaign on Twitter using the hashtag #OrangeWolves.

People can also visit the Orange Wolverhampton information stand at the Civic Centre, St Peter’s Square, today (Wednesday) from 12pm to 4pm and again on Monday 9 December from 11am to 3pm.

Visitors will be able to find out more about the support available to victims, as well as training opportunities available for professionals. They can also pick up a free orange ribbon – or buy a limited edition orange badge for a suggested donation of £1 – which they can wear in support of this year's campaign. Handy Orange Wolverhampton trolley tokens are also available for £1, with all proceeds going towards the annual campaign.

Anyone suffering from domestic violence, female genital mutilation, forced marriage, so-called ‘honour based’ violence, sexual violence, stalking or harassment, or knows someone who is, should call the relevant helpline: 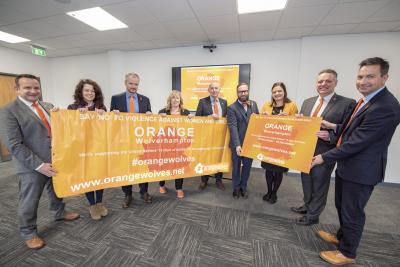 Members of the City of Wolverhampton Council's Strategic Executive Board, including centre, Chief Executive Tim Johnson, are supporting the Orange Wolverhampton campaign to end inter-personal violence 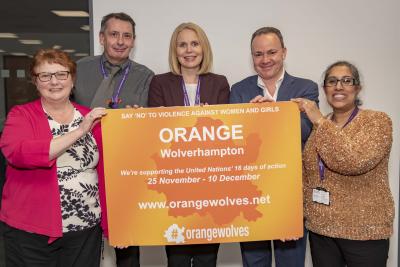 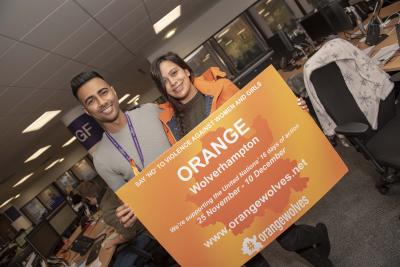