Shoppers can find out more – and show their support for – this year’s Orange Wolverhampton safeguarding campaign by calling into a pop up shop at the Wulfrun Centre next week.

The annual campaign, coordinated by Wolverhampton Safeguarding Together, the Safer Wolverhampton Partnership, Wolverhampton Domestic Violence Forum and the City of Wolverhampton Council, gets underway on Monday (25 November 2019) and aims to end 'interpersonal violence', including domestic abuse, female genital mutilation, forced marriage, so called ‘honour based’ violence, sexual violence and stalking and harassment.

Visitors to the pop up shop, opening opposite the Wulfrun Centre Management Suite on Monday and Tuesday (25 and 26 November) from 10am to 4pm, will receive free orange ribbons to wear in support the 16 day campaign. Shoppers can purchase a limited edition metal orange pin badge or orange trolley token for £1 each, with all proceeds going towards the campaign. Visitors will also be able to get their nails painted orange to show their support.

Specialist services will be on hand to offer advice, help and support to anyone worried about domestic or sexual violence, abuse, stalking and harassment, forced marriage and so called honour based violence, or anyone who wants help to change their controlling or abusive behaviour.

Shoppers can also support the campaign by making a pledge which will be added to a map of Wolverhampton, or having their photo taken in the special orange photo frame, with pictures being included in the #OrangeWolves Flickr gallery. In addition, there will be the chance for people to sign up to become a community champion and help raise awareness of the campaign's safeguarding messages in their local communities.

Kathy Cole-Evans, Chief Officer of Wolverhampton Domestic Violence Forum, said: "We are delighted to open the Orange Wolverhampton pop up shop once again this year, enabling us to highlight the campaign and its messages and meet with members of the public who may have safeguarding concerns about themselves, their friends or their loved ones. Please come along, say hello and show your support for the campaign."

Anyone suffering from domestic violence, female genital mutilation, forced marriage, so called ‘honour based’ violence, sexual violence, stalking or harassment, or knows someone who is, should call the relevant helpline: 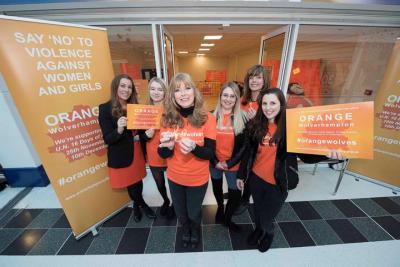