A Wolverhampton city centre business that opened in August 2018 is set to expand by converting a neighbouring council owned unit into a tea room.

Tony’s Delicatessen opened in Queen Square, in August 2018, after taking over as a tenant of the council owned building that formerly housed Yoo Recruit.

Just 9 months later he has decided to open Tina’s Tea Room in the shop vacated by the Shop in the Square, following its move to the nearby Mander Centre.

The tea room is named after Tony’s business manager, Tina Bood, and will host a public taster session from 12pm to 2pm on Saturday, ahead of its official opening on Monday 20 May.

It will trade from Mondays to Saturdays, between 8am and 3pm.

Proprietor, Tony Wortley, said: “There are a number of coffee shops in the city centre and I thought the people of Wolverhampton deserved more choice.

“Hopefully the 2 businesses will work well together, especially as we will be serving a number of the deli products in the tea room.

“This is an exciting time for my business and I hope people enjoy what we have to offer.”

The tea room will sell a collection of cakes, soups, salads and paninis, as well as 15 varieties of tea, and will serve continental breakfasts from 8am to 11am each day.

City of Wolverhampton Council Head of Enterprise, Isobel Woods, added: “We very much value the presence of independent businesses like this and the creative people behind them.

“These are the businesses that help give Wolverhampton its own identity and character.

“I am delighted the council has played a part in helping Tony establish his business and I would urge people to pop in and support his latest venture.” 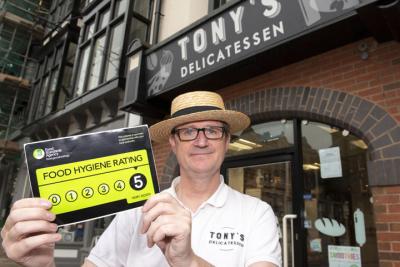