In the same period, the percentage of city schools rated either Good or Outstanding by Ofsted has soared, from 70% in 2014 to 86% now.

The dramatic turnaround puts the percentage of Good or Outstanding schools in Wolverhampton in line with the national average for the first time and above the West Midlands average of 84%. Standards in the city are also improving at a much faster rate.

As of the end of September, every nursery school and Pupil Referral Unit in the city with a current Ofsted judgement was rated either Good or Outstanding, along with 90% of all primary schools.

The improvement among primary schools – up from 76% in 2014 – is particularly impressive because Wolverhampton was ranked bottom of Ofsted's primary school performance table just 6 years ago.

The rising standards have particularly been driven by improvements in schools maintained by the City of Wolverhampton Council. Overall, 94% of maintained schools are now rated either Good or Outstanding, including 98% of maintained primary schools.

And it's not just the schools themselves that are improving – pupil attainment has also increased substantially in recent years.

The number of pupils in Wolverhampton achieving a Good Level of Development at Early Years Foundation Stage has risen at above the national average rate over the last 7 years, while Key Stage 2 attainment and progress has improved significantly across reading, writing and maths.

Progress in all 3 subjects has been significantly above national levels for 3 consecutive years, with Wolverhampton the only council in the region to achieve this benchmark.

Primary aged children in Wolverhampton who are eligible for Pupil Premium achieve better than their peers nationally and regionally, while attainment at Progress 8 has improved for the fourth consecutive year and is now almost at the national average for the first time.

Councillor Dr Michael Hardacre, the City of Wolverhampton Council's Cabinet Member for Education and Skills, said: "School standards in Wolverhampton have been soaring in recent years and this is not only great news for children, their families and of course the schools themselves, but also the city itself, which will benefit from a better educated and more skilled workforce in the future.

"Particularly impressive is the performance of our maintained schools – who have played a key part in this success story – and the speed at which schools across the city are improving; the proportion of schools rated Good or Outstanding is now at national average and I hope to see Wolverhampton pulling ahead of the pack in the future.

"This transformation is down to the hard work of school leaders, teachers, governors, pupils and parents, and also thanks to the challenge and support given through the council's School Improvement Strategy which was launched just over 4 years ago.

“We are creating an education system in Wolverhampton that promotes the very highest standards for all our children and young people and which enables every pupil to reach their full potential.

"We know there is still plenty of hard work ahead of us, particularly around further raising standards in secondary education, and we will continue to work closely with academies and council maintained schools to bring about the improvements required, but what is clear is that there has never been a better time to be a pupil at one of our city’s schools."

Emma Bennett, the council's Director of Children's Services, said: "The council is committed to ensuring children and young people have the best possible start in life and I would like to congratulate our schools, and members of the council's School Improvement Team, on the rapid progress they have made over the last few years.

"Feedback from Ofsted is consistently positive, in particular around the support provided by the council in helping schools to identify their strengths and weaknesses and ultimately helping them to improve still further." 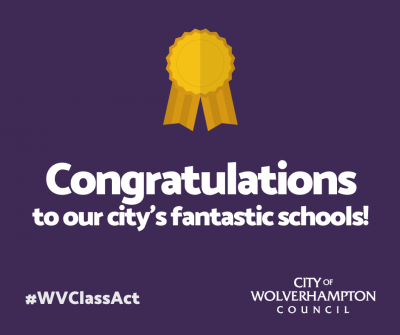