Pupils at Parkfield Primary were among the first to welcome a special Flu Fighters touring theatre show to their school.

Actors from Gazebo Theatre in Education have brought to life the exciting story of the Flu Fighters' annual battle against the invading flu aliens Chilly, Achy and Snotty for a special production which is going into a number of local schools over the coming weeks.

The show premiered to an audience of more than 250 pupils from Oak Meadow, Long Knowle, St Andrews and Woodfield primary schools before Wolverhampton Clinical Commissioning Group's Annual General Meeting at Molineux Stadium in September, and began its tour with performances at Parkfield Primary School and Holy Trinity Catholic Primary School just before half term. It will be visiting a number of other local schools in the coming weeks.

Gazebo's innovative adaptation of the 2 Flu Fighters stories sees our heroes – the Nurse, played by Fran Richards, Ani (April Hudson) and Daniel (Dominic Thompson) – recall their past encounters with Chilly, Achy and Snotty and recruit local children as Flu Fighters as they prepare for the impending flu invasion this winter.

Councillor Jasbir Jaspal, the City of Wolverhampton Council's Cabinet Member for Public Health and Wellbeing, said: "Like the books on which it is based, this is a fabulous production which is both exciting and educational, and really gets over to its young audience the importance of having their free flu vaccination this winter."

The Flu Fighters campaign devised by the council, CCG and the Royal Wolverhampton NHS Trust helped bring about a 13% increase in the number of children who received their free nasal spray in 2018.

This year, all children from Reception to Year 6 at infant, junior and primary schools in Wolverhampton, and all children in special schools, are being offered the free flu vaccination at their school. Free copies of 2019's tale, Flu Fighters in The Battle of Planet Bogey, are being distributed to all infant, junior and primary school aged children, along with parental consent forms and information about the flu vaccine. Parents are encouraged to return their consent forms as soon as possible.

Any child or young person who has missed their vaccination at school can get it either at one of the special catch up clinics being held at The Hub at Ashmore Park, Griffiths Drive, WV11 2LH on Saturday 30 November from 9am to 1pm or the Phoenix Centre, Parkfield Road, WV4 6ED on Saturday 14 December from 9am to 1pm, or by contacting their GP.

To find out more about the free nasal spray, which is also available to children aged 2 and 3 and children aged 11 and over with some long term health conditions via GPs, please visit Flu Vaccines.

Meanwhile, people with long term health conditions, the over 65s, carers and care staff, people in long stay residential care homes and pregnant women are also eligible for a free vaccine through their GP or pharmacist, while anyone else can get their vaccination from many local pharmacies for a small charge. For more information, please visit Flu Vaccines. 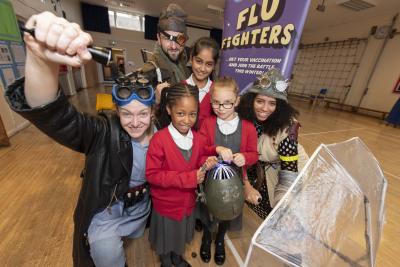