This year's Orange Wolverhampton campaign is once again going global!

Last year, supporters took the safeguarding campaign's messages to the Caribbean, and this time Orange Wolverhampton headed for South Africa.

Steve Dodd, from Wolverhampton Safeguarding Together, visited Cape Town last month for an international learning event organised by Comic Relief – and was quick to spread the word about the campaign to end 'interpersonal violence', including domestic abuse, female genital mutilation, forced marriage, so-called ‘honour based’ violence, sexual violence and stalking and harassment.

Steve, Chair of the Wolverhampton Safeguarding Together Community Engagement Sub-group, said: "Orange Wolverhampton is held every year in support of the United Nations' Orange The World campaign to end violence against women and girls, and taking the messages from our campaign with me to South Africa was too big an opportunity to miss.

“But the campaign didn't just stay in Cape Town; I met representatives from organisations across the globe who pledged to take the Orange The World campaign home with them to places as far afield as Bogota, the capital of Colombia."

Meanwhile, residents, businesses, schools, faith groups, charities and other organisations back home in Wolverhampton are once more being encouraged to turn the city orange between 25 November and 10 December.

In doing so, they will not only help raise awareness of Wolverhampton’s drive to end interpersonal violence, but also highlight the help and support that is available to victims from local and national organisations such as The Haven, Wolverhampton Domestic Violence Forum, St George's Hub, the West Midlands Forced Marriage and Honour-Based Violence Helpline and the City of Wolverhampton Council.

Thousands of people also showed their support by wearing orange ribbons throughout the 16-day campaign, coordinated by Wolverhampton Safeguarding Together, the Safer Wolverhampton Partnership, Wolverhampton Domestic Violence Forum and the City of Wolverhampton Council.

Kathy Cole-Evans, Chief Officer of Wolverhampton Domestic Violence Forum, said: "The colour orange symbolises a brighter future and a world free from interpersonal violence, and the Orange Wolverhampton campaign is an important part of our work to make sure victims know how to get the help and support they need.

"We want to make this year's campaign the best ever – and this is your chance to get involved. There are so many things you can do, big and small, all of which will help raise awareness of these issues."

Key dates include Wear Orange Day on Friday 6 December, when people are encouraged to wear orange clothing, and the return of the Orange Wolverhampton pop up shop in the Wulfrun Centre on Monday and Tuesday 25 and 26 November, at which people will be able to find out more about the campaign and the help and support available locally.

Representatives from Children Change Colombia took the #OrangeWolves campaign back home with them to Bogota, from where this photo was taken 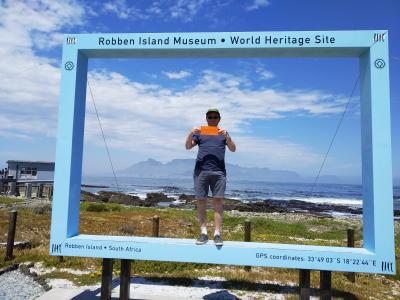 Steve Dodd, Chair of Wolverhampton Safeguarding Together Community Engagement Sub-group, took the #OrangeWolves message to Robben Island, with Table Mountain and Cape Town in the background