New sports facilities to be opened with family fun day

New sporting facilities in Whitmore Reans will be officially opened at a family fun day this weekend.

The City of Wolverhampton Council worked with the England and Wales Cricket Board (ECB) to create the sports facility at Peace Green, Dunstall Road, which includes 3 all weather cricket training nets and netball and basketball facilities.

The new facilities have already proved a hit with local residents, with the cricket lanes being officially opened at the fun day on Sunday (21 July). The event, from 10am to 1pm, also features penalty shoot out competitions with Wolverhampton Wanderers, bowl at the stump contests, WV Active class demonstrations, food stalls and much more.

Councillor Jasbir Jaspal, the City of Wolverhampton Council's Cabinet Member for Public Health and Wellbeing, said: "We are delighted to have worked with the England and Wales Cricket Board to deliver these facilities which have further increased opportunities for people in Whitmore Reans to get active.

"They have not only provided sporting facilities to help improve people's physical health and wellbeing, but also transformed a previously obscured area of Peace Green which had been the focus of anti social behaviour, complementing the well maintained open space which offers an outdoor gym, children's play area and walking routes."

The £150,000 scheme was jointly funded by the council’s Sport Development and Investment Strategy and the ECB, with the new facilities managed by local community groups.

The netball and basketball facilities are available for use by the general public during Peace Green's normal opening hours, while the cricket facility is subject to booking arrangements through local community organisations which hold keys for the site, including Dunstall Hill Primary School, TLC College and Jamia Masjid Al-Aqsa Mosque. For more details about booking arrangements, please visit Peace Green Community Cricket Facility. 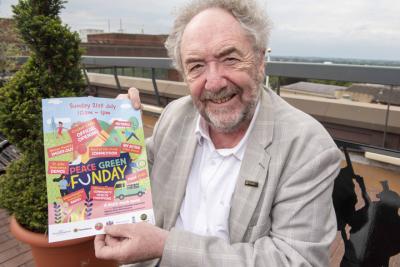