New helpline launches for victims and survivors of abuse

A new helpline providing support and information regarding forced marriage and so called 'honour based' violence was officially launched last week.

The helpline – 0800 953 9777 – is aimed at victims, survivors and professionals and has been developed by the West Midlands Forced Marriage and Honour Based Abuse Consortium thanks to funding from the West Midlands Police and Crime Commissioner David Jamieson.

The Consortium is a partnership between Roshni, SWAN and Panahghar, three specialist organisations with a combined experience of over a century of supporting Black and Minority Ethnic communities in the region.

A forced marriage is a criminal offence in the UK and takes place against someone’s will. Emotional, physical or financial pressure may be used to force the victim to marry, often by their family.

So-called ‘honour-based’ abuse is a violent crime which includes patterns of coercive behaviour which can often be perpetrated by family members. This is used to control the victim’s behaviour and ‘protect’ cultural or religious beliefs. Abuse can include serious offences such as murder, rape or false imprisonment.

The helpline was officially launched at an event at the City of Wolverhampton Council's Civic Centre on Friday (18 October) organised by the Consortium in partnership with Wolverhampton Domestic Violence Forum and Jaikara, a Wolverhampton-based organisation which supports victims of domestic abuse and honour-based violence.

Jaikara chair and City of Wolverhampton Councillor Rupinderjit Kaur said: “Every year hundreds of people across the country, both male and female, are forced into marriage against their will, often by violence and blackmail from their own families.

“So-called honour based violence is also hidden within families and communities; statistics show there are around 100 recorded incidents in the UK every month, but the actual number of cases is likely to be much higher as it is under reported.

“The launch of this new helpline enables victims, survivors and professionals to access information around forced marriage and honour based violence, and get the help and support they need.”

Mr Jamieson added: “This 24 hour helpline will ensure that victims of forced marriage and honour based abuse are able to seek the right help and support.

“As well as supporting victims I am also committed to tackling the violence in the first place. I shall continue to support West Midlands Police to ensure so called hidden crimes are dealt with as a matter of urgency.”

Friday's event also included the screening of the award-winning film Land, Gold, Women. Directed by Avantika Hari, the film highlights some of the complex, cultural and familial issues relating to honour based abuse. The title of the film references the three elements in which tribal honour is preserved - land, gold and women.

Residents, businesses, schools, faith groups, charities and other organisations across the city are once more being encouraged to 'Orange Wolverhampton' between 25 November and 10 December. In doing so, they will help raise awareness of Wolverhampton’s drive to end interpersonal violence. 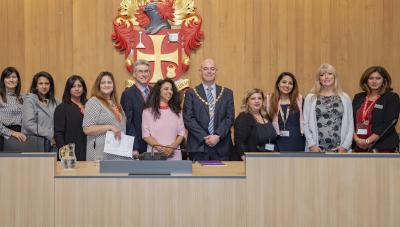 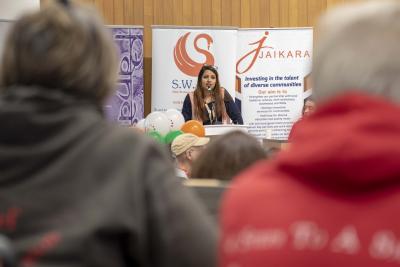