The construction phase of the Civic Halls' restoration and improvement programme is set to get the green light - with works due to get underway this month (March).

The iconic Grade II listed building has been closed while contractors carry out extensive asbestos removal.

This is expected to be completed in the coming weeks, paving the way for essential structural, engineering and electrical works and the major restoration and improvements of the halls to ensure they remain a leading performance venue for decades to come.

The new programme means the Civic Halls will re-open for business in autumn 2021, following its £38.1 million overhaul.

The details of the programme will be considered for approval by City of Wolverhampton Council's Cabinet Resources Panel on Tuesday 5 March.

"Generations of Wulfrunians and music and comedy fans from across the UK have shared unforgettable memories here with international stars and the biggest bands.

"We'll be creating a world class venue for bigger audiences which is exactly what promoters are looking for.

"The Civic Halls are a critical part of how we are re-imagining and re-inventing our city centre, along with great connectivity, great public spaces, great new homes, a great leisure and sporting offer, vibrant events, outstanding arts and culture, and a thriving commercial district.

"It forms part of the groundswell of regeneration activity across the city, where £3.7 billion of investment is on site or in the pipeline."

Audience figures are also expected to increase by at least 10,000 per year over the opening three years, up to around 180,000.

The key benefits of the refurbishment to event-goers include a second balcony for the Civic Hall which will provide additional seating; an extended stage to the rear to at attract bigger and better shows; wider and more comfortable seats; bigger and better bars and more space to socialise; the Wulfrun Hall getting a balcony which will provide additional seating; expanded and revamped toilet facilities to give visitors an improved experience; lift access to new balconies; better access arrangements for disabled visitors including enhanced wheelchair access, and a greater number of accessible viewing points; and improved Civic Hall room temperatures through the introduction of a new air conditioning system.

When completed, both venues will be able to cater for around 4,600 people standing and 3,130 people seated in total, an increase of almost 500 and 450 respectively. 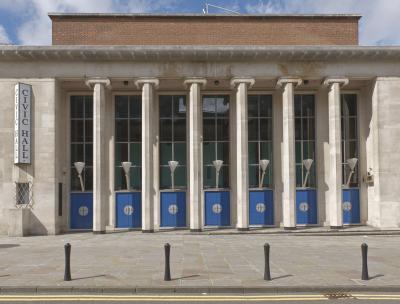