A spa break for two, a BMW for the weekend and luxury watches are just some of the many prizes up for grabs in the Mayor of Wolverhampton's Grand Charity Raffle.

The Mayor, Councillor Phil Page, hopes that the raffle, which launched today (Monday 4 February), will raise as much as possible for his four charities.

Raffle prizes have been donated by local businesses and organisations.

Star prizes include an overnight spa break for two at The Elms Hotel in Worcestershire, the use of a BMW car for a weekend as well as designer watches from Gucci, Aigner and Michael Kors.

Other prizes include £200 cash, a family weekend break at the Kingswood Trust in Staffordshire, a haircut at celebrity hairdressers Royston Blythe, two premier tickets for Wolverhampton Racecourse, a £100 Intu gift voucher, an iPad and a 32ins Phillips TV.

Councillor Page said: "We have some absolutely superb prizes up for grabs in the raffle and there is something for everyone. Whether you've got your eye on being pampered at a spa break, driving a luxury BMW for a weekend or any of the many other prizes, we feel sure people will want to have a go.

"All money raised will go towards supporting four fantastic charities who I am raising money for throughout my year in office."

Tickets cost £2 and are available from Main Reception at the Civic Centre, St Peter's Square, Wolverhampton.

The Mayor's charities will also be selling tickets including at the MS Therapy Centre off Tettenhall Road, the Kingswood Trust, Hollyhead Road, Kingswood, and the Good Shepherd in Need shop in Church Street, Bilston.

The Mayor and Mayoress will be selling raffle tickets at the Civic Centre on Thursday (7 February) between 9.30am until 2pm and at Bilston Market on Saturday (9 February) from 9am to 2pm. Anyone purchasing tickets on either of these 2 dates will be able to have their picture taken with the Mayor. 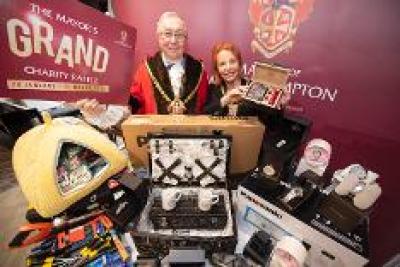 Mayor and Mayoress with some of the prizes 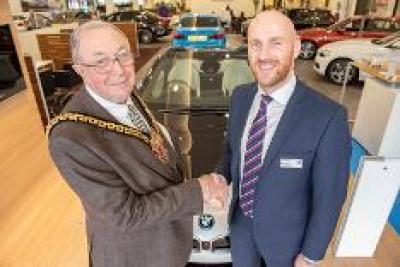