A Wolverhampton tenant was put at risk from a ceiling that partially collapsed and was left unable to use her shower after her landlords failed to adequately repair a leak.

Sunita and Surinder Paul have each been fined £500 for breaching a council abatement notice ordering them to complete the repairs on the property in Mill Street, Bilston.

In March 2020, the tenant reported water leaking down into the ceiling whenever she used her shower. This prevented her from being able to use the shower which was her only washing facility.

The landlords were required by the notice to eliminate the water leak, prevent its recurrence and to leave the ceiling structurally sound.

However, a hearing at Dudley Magistrates Court heard that instead of undertaking the necessary works, the defendants instead simply used black sticky tape to cover over a crack in a tenant’s shower tray.

This failed to prevent water leaking through to the hallway ceiling below, resulting in the leak reoccurring and the ceiling partially collapsing.

Eventually, the council were forced to undertake the repairs to ensure the safety of the private tenant.

Sunita and Surinder Paul, of Wilkes Road, Bilston, pleaded not guilty to the offence and said they had only repaired the shower temporarily with tape while waiting for a new shower tray to be delivered – a claim rejected by District Judge Michael Wheeler.

As well as receiving fines, the pair were also ordered to pay prosecution costs of £2,342.51 each and a victim surcharge of £50 each.  This included the costs incurred by the council in undertaking the works in default.

Judge Wheeler said: “It was obvious the shower tray needed to be replaced. You did very little at all and you left it. You did not do what you were required to by the notice.

“I am not satisfied that the tray had been ordered and had not been delivered. Even if it had, there was no communication with local authority to explain which casts doubt on the truth of your evidence.”

Councillor Bhupinder Gakhal, City of Wolverhampton Council’s cabinet member for city assets and housing, said: “These rogue landlords put the safety of a tenant at risk by failing to carry out essential repairs. Their negligence caused a ceiling to partially collapse and it meant the tenant could not use the shower to be able to wash herself.

“I am pleased that the council were able to undertake these works to give the tenant back her dignity and keep her safe. The court has rightly taken a very dim view of these landlords who have now been landed with a fine and court costs which will cost them a whole lot more than if they had just done the right thing and taken care of their tenant in the first place.

“This should serve as a warning to any unscrupulous landlords out there – obey the law or you will be punished by the courts.” 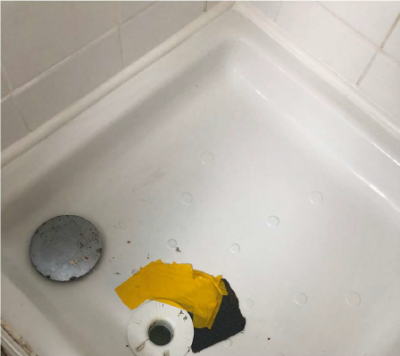 The botched repair of the shower tray 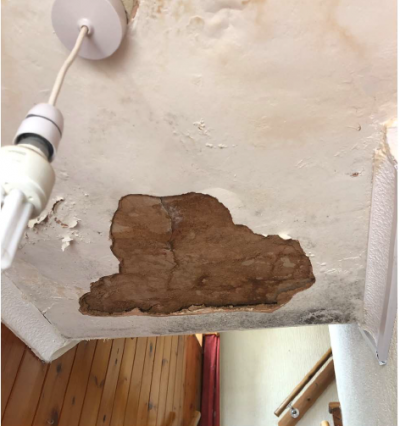 The damage the leak caused to the ceiling