Hunt for Wolverhampton Young Citizen of the Year 2019 gets underway

Wolverhampton Wanderers' captain Conor Coady has got the ball rolling on this year's search to find the city's most outstanding.

The popular centre back is a keen supporter of the Wolverhampton Young Citizen of the Year competition and has once again helped to launch the awards.

He appeared alongside last year's winners, Millie Betteridge and Taranveer Khangura, the Deputy Mayor of Wolverhampton Councillor Claire Darke and Roger Timbrell, Chair of the organising committee from the city's Rotary Clubs, at the launch event.

Conor said: "I jumped at the opportunity to support these awards. To put my name to something like this is nice for the football club and is nice for everybody involved. If it helps people, then that is the main thing."

Deputy Mayor Councillor Darke said: "It is an absolute pleasure to be able to support this prestigious award and help find this year's young citizen of the year.

"As a city, it is important that we recognise the great things that our young citizens do, as they play a key part in shaping our city for the future. I encourage everybody to nominate a young person they know who goes above and beyond for others".

Organised by the city's five Rotary clubs, in partnership with the City of Wolverhampton Council, the Express & Star, Wolverhampton Wanderers Foundation, The Way Youth Zone and Waitrose, the awards recognise young people aged 13 to 19 who have made a significant contribution to the city in one way or another.

Last year, Millie and Taranveer were joint winners of the award. Millie was recognised for her work with the city's Youth Council, ensuring that young people's voices across the city were heard, whereas Taranveer was nominated for raising vast amounts of money for charity and working with her classmates to reduce cultural prejudice in her community.

Anyone can nominate a young person who lives, goes to school or works within Wolverhampton. For more details about the award, plus entry forms, please visit Young Citizens Awards 2019.

Paper nomination forms will also be available from Waitrose on Penn Road and can be posted to David Johns, 1 The Wheatlands, Bridgnorth, Shropshire WV16 5BD. Entries close on 31 May.

Pictured at the launch of this year's search for Wolverhampton's Young Citizen of the Year are, front, left to right, 2018 joint winners Millie Betteridge and Taranveer Khangura and, back row, left to right, Deputy Mayor of Wolverhampton Councillor Claire Darke, Wolverhampton Wanderers captain Conor Coady and Chairman of the Organising Committee Roger Timbrell 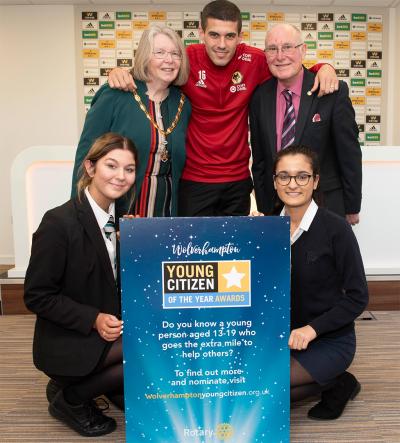 Hunt for Wolverhampton Young Citizen of the Year