This year's Orange Wolverhampton pop up shop proved a huge success, with visitors finding out more about the annual safeguarding campaign to end inter personal violence and being signposted to help and support.

Hundreds of people called into the shop, at the Wulfrun Centre on Monday and Tuesday (25 and 26 November), meeting representatives from 19 organisations and learning about the campaign to raise awareness of the issues of domestic violence, female genital mutilation, forced marriage, so-called ‘honour based’ violence, sexual violence, stalking or harassment, and the help and support which is available to victims from local and national organisations.

Thousands of orange ribbons were given out for people to wear to show their support for the campaign, while many also took the opportunity to purchase limited edition orange pin badges and orange trolley tokens, with all proceeds going towards the safeguarding campaign.

Meanwhile, professionals were on hand to provide immediate help to a number of individuals who disclosed that they were currently being abused in some way, and also supported dozens more who disclosed previous instances of abuse or violence.

More than 50 people signed up for training with Wolverhampton Domestic Violence Forum to become Violence Against Women and Girls 'community champions', while over a dozen asked about volunteering opportunities with the organisation. Visitors also made public pledges on an orange map of Wolverhampton or had their photographs taken to demonstrate support, while hundreds of leaflets and posters were distributed to individuals or groups.

Visitors were even able to take orange baubles from the pop up shop’s Christmas tree to hang at home to remind them of the campaign over the festive period.

Penny Darlington, Chair of Wolverhampton Domestic Violence Forum, said: "The pop up shop was very successful once again this year; not only were we able to share the Orange Wolverhampton campaign messages with hundreds of shoppers, but we were also able to offer important help and support to a number of people who are currently suffering, or have previously suffered, from abuse.

"The message is clear, if you or someone you know is suffering from domestic or sexual abuse or stalking, or if you’re concerned about forced marriage, honour based violence, or female genital mutilation, please get help."

She added: “We would like to thank everyone who visited the shop, and all those agencies who were present throughout to provide help and advice, and also say a big thank you to Year 6 pupils at Bantock Primary School who created orange hands for our window display.”

Anyone suffering from domestic violence, female genital mutilation, forced marriage, so called ‘honour based’ violence, sexual violence, stalking or harassment, or knows someone who is, should call the relevant helpline:

For more information of this year's campaign, and details of how to get involved, please visit the Orange Wolverhampton website or follow the campaign on Twitter using the hashtag #OrangeWolves. 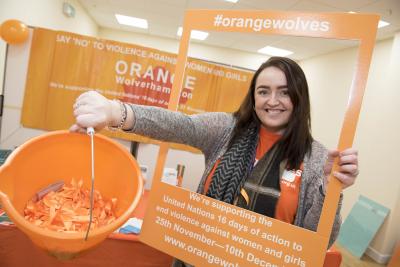 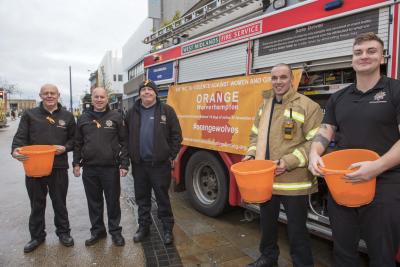 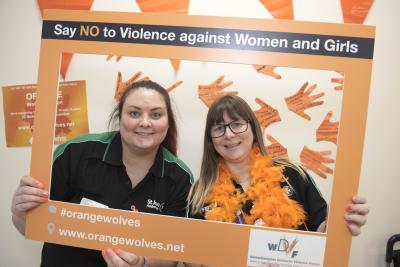 The pop up shop proved a huge success