Wolverhampton's unique Flu Fighters campaign – which is encouraging thousands more children to have their flu vaccine – has won a prestigious communications award.

The popular campaign, developed by the City of Wolverhampton Council’s Communications and Public Health teams and the communications teams at Wolverhampton Clinical Commissioning Group and the Royal Wolverhampton NHS Trust, was named the winner of the hotly contested Best Creative Comms category at this year's comms2point0 UnAwards, with judges calling it "brilliant".

The Flu Fighters made their debut in 2018 and helped encourage record numbers of children in Wolverhampton to have their flu vaccine. The campaign saw a free children’s storybook, Flu Fighters Versus Chilly, Achy and Snotty, written, illustrated and produced in house and distributed to thousands of primary aged pupils across the city.

In total, over 3,000 more children received their vaccination in 2018 compared to the year before, and the campaign proved so successful that it returned this year with a second out of this world book, Flu Fighters in The Battle of Planet Bogey.

The sequel, again produced entirely in house, saw our brave heroes blast off from Earth to take the fight to the aliens’ home planet. Early data suggests uptake of the vaccine in Wolverhampton has increased for a second consecutive year.

The campaign, which this year also saw the premiere of a Flu Fighters play in schools by Gazebo Theatre in Education, saw off tough competition from dozens of other entries from organisations nationwide at the UnAwards 2019, with judges saying: “This entry won the judges’ hearts with not only its creative approach to increasing uptake but also the impressive delivery of the messaging, with the results speaking for themselves.”

Councillor Jasbir Jaspal, the City of Wolverhampton Council's Cabinet Member for Public Health, said: "The Flu Fighters campaign has been a tremendous success, driving uptake of the vaccine among children in Wolverhampton to record levels, and I would like to congratulate public health and communications colleagues at the council, CCG and NHS Trust on this richly deserved award.

"The impact of the Flu Fighters is clear; uptake of the vaccine among children in Wolverhampton, which for many years was the lowest in the Black Country, was by far the best in 2018 – and also above the national average for the first time.

“We were delighted to bring the Flu Fighters back with an all new story for 2019, and every indication is that uptake in Wolverhampton has increased further again this year.”

Mike Hastings, Director of Operations for Wolverhampton Clinical Commissioning Group, said: “We are very pleased to be part of this award-winning partnership which brings together health and social care staff, not just those on the front line, but also our communications staff.

“This project has showcased how we can make a difference through innovative engagement ideas which have really helped us to engage with the children of our city.”

Matt Reid, Head of Nursing at Royal Wolverhampton NHS Trust, added: “Children are equally as vulnerable to flu as adults and will suffer the same symptoms as adults do, and will in some cases need to be admitted to hospital.

“This book was designed to help children, and their parents, understand why the flu vaccine is so important. The more people in the city that have the vaccine, the better it is.”

The comms2point0 UnAwards recognises genuine creativity, innovation and solid results. In total, 342 nominations were received across the 19 categories from organisations around the UK. The winners were announced at a ceremony at the Everyman Cinema in Birmingham on Friday 6 December.

All children from Reception to Year 6 at infant, junior and primary schools in Wolverhampton, and all children in special schools, have been offered the free flu vaccination in school. The vaccine is also available to children aged 2 and 3, and children aged 11 and over with some long term health conditions, through local GPs. Any child or young person who may have missed their vaccination can get it by contacting their GP.

As well as the vaccination for children, people with long term health conditions, the over 65s, carers and care staff, people in long stay residential care homes and pregnant women are also eligible for a free vaccination through their GP or pharmacist, while everyone else can get the vaccine from many local pharmacies for a small charge. For more information, please visit Flu Vaccines. 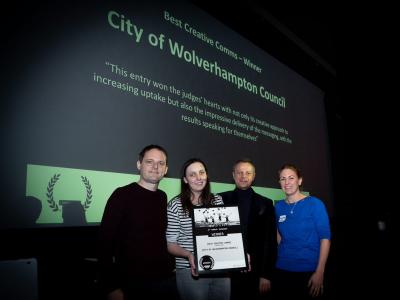 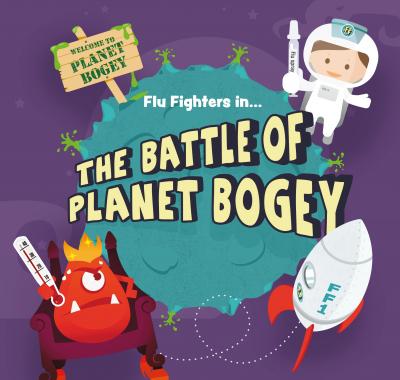 The cover of this year’s story, Flu Fighters in The Battle of Planet Bogey