Wolverhampton's unique Flu Fighters campaign, which is encouraging thousands more children and young people in the city to get their free flu vaccination, has been shortlisted for a prestigious award.

The popular campaign, developed by the City of Wolverhampton Council’s Public Health team and communications teams from the council, Wolverhampton Clinical Commissioning Group and the Royal Wolverhampton NHS Trust, is in the running for the Best Creative Comms award at the sixth annual comms2point0 UnAwards next month.

The Flu Fighters launched in 2018 and helped deliver record uptake levels in the city. It saw a free children’s storybook, Flu Fighters Versus Chilly, Achy and Snotty, developed and produced in-house and distributed to thousands of pupils across Wolverhampton, with over 3,000 more children receiving their vaccination last winter compared to the year before.

The campaign proved so successful that it returned this year with a second out of this world Flu Fighters book, Flu Fighters in The Battle of Planet Bogey, which sees our brave heroes blast off from Earth to take the fight to the aliens on their home planet. Early data suggests uptake of the vaccine in Wolverhampton has increased once more.

John Denley, the City of Wolverhampton Council's Director of Public Health, said: "The impact of the Flu Fighters cannot be underestimated, helping achieve the best uptake of the flu vaccine among local children for many years.

“The colourful characters and their exciting exploits have proved popular with children and parents alike and it is great that the innovative campaign, delivered thanks to excellent partnership working between ourselves, the CCG, NHS Trust and Vaccination UK – has been recognised by being shortlisted for an award."

The comms2point0 UnAwards recognises genuine creativity, innovation and solid results. In total, 342 nominations were received across the 19 categories. The winners will be announced at a ceremony at the Everyman Cinema in Birmingham on Friday 6 December.

This year, all children from Reception to Year 6 at infant, junior and primary schools in Wolverhampton, and all children in special schools, are being offered the free flu vaccination at their school. The vaccine is also available to children aged two and three, and children aged 11 and over with some long term health conditions, through local GPs.

Any child or young person at schools which have already been visited by Vaccination UK and who may have missed their vaccination can get it either by contacting their GP or by attending a special catch up clinic at the Phoenix Centre, Parkfield Road, WV4 6ED on Saturday 14 December from 9am to 1pm.

As well as the vaccination for children, people with long-term health conditions, the over 65s, carers and care staff, people in long-stay residential care homes and pregnant women are also eligible for a free vaccination through their GP or pharmacist, while everyone else can get the vaccine from many local pharmacies for a small charge. For more information, please visit Flu Vaccines. 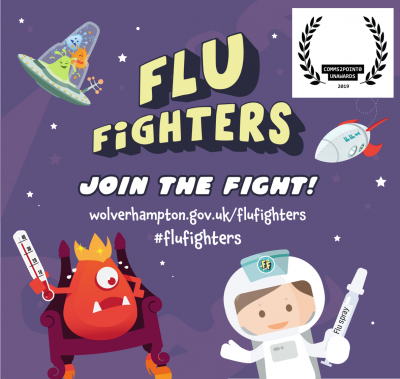