A ground breaking injunction banning car cruising in the Black Country will remain in place for at least 2 more years after a High Court judge said he was "entirely satisfied" it should continue.

The injunction, which came into force in February 2015, bans people from taking part in a car cruise anywhere within Wolverhampton, Dudley, Sandwell or Walsall, or from promoting, organising or publicising any such event in the same area.

At a review hearing into the effectiveness of the injunction held at the High Court in Birmingham yesterday (Thursday 21 February, 2019), His Honour Judge McKenna heard evidence of the impact it has had over the last 4 years.

The court was told that the injunction has acted as a deterrent to those previously involved in, or considering becoming involved in, car cruising, and has significantly reduced instances of car cruising throughout the region.

Nevertheless, the problem has not been totally eliminated - police received over 1,000 reports related to car cruising in the Black Country between October 2017 and December 2018 - and therefore it was vital that the injunction remained in force to enable the authorities to continue to tackle the "nuisance, danger and anti-social problems" caused by car cruising.

The court heard that strong enforcement action has been taken to secure compliance with the injunction and to deter further offending.

47 respondents have been subject to committal proceedings for breaching the injunction since 2015, including 32 within the last 12 months. One defendant received an immediate custodial sentence of 3 months, 14 were given suspended sentences of up to 6 months while others received fines of up to £2,000 and were ordered to pay costs. A further 12 respondents have given undertakings to the court.

In addition, over 100 warning letters have been issued, and in all but one instance no future offending behaviour has been reported. Meanwhile, police continue to undertake monthly car cruise operations, supported by technology including drones which has enabled the authorities to secure high quality video evidence of gatherings.

In her evidence to the court, Joanne Mason, the manager of the City of Wolverhampton Council's Anti-Social Behaviour Team, said: "Since the injunction came into force, following a carefully orchestrated and extensive publicity campaign and effecting policing of the affected areas, I am pleased to report that on the whole the injunction has had a positive impact across the Black Country. It has significantly reduced the problem and eliminated car cruising altogether in some of the former hotspots."

His Honour Judge McKenna, sitting as a High Court judge, said he was "entirely satisfied that the injunction should be continued" until at least February 2021.

Councillor Hazel Malcolm, the City of Wolverhampton Council's Cabinet Member for Public Health and Wellbeing, said: "Car cruising is not only illegal but also dangerous, putting the safety of participants and spectators at risk. It also generates late night noise and disturbances for people living near to hotspots. The injunction is playing a crucial role in helping the authorities tackle the nuisance, danger and anti-social problems it causes."

Councillor Val Gibson, Cabinet Member for Governance, added: "I am delighted that the injunction will continue to be in place for at least another 2 years. It sends out a clear message that people who organise, promote or take part in a car cruise in the Black Country - whether they are a driver or passenger - will be in contempt of court and will face the consequences." 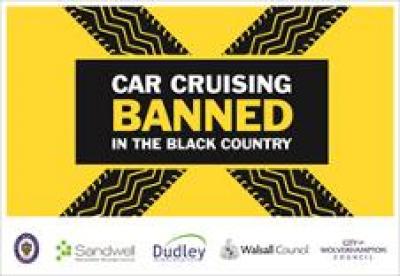