Political leaders are once more backing the campaign to Orange Wolverhampton and help end interpersonal violence.

The city is supporting the United Nations' annual 16 day Orange the World campaign, which begins on 25 November, with a wide range of activities taking place organised by businesses, community groups and individuals to turn ‘Wolverhampton Orange’.

The campaign raises awareness of Wolverhampton’s drive to end interpersonal violence – primarily that committed against women and girls, including domestic abuse, female genital mutilation, forced marriage, so-called ‘honour-based’ violence, sexual violence and stalking and harassment – and the help and support that is available to victims locally.

And politicians are also throwing their weight behind the campaign. Councillor Ian Brookfield, Leader of the City of Wolverhampton Council and leader of the council’s Labour Group, said: "The Orange Wolverhampton campaign is a vitally important way in which we can all highlight the issue of interpersonal violence, and the help and support that is available to victims.

"These abhorrent crimes are primarily committed against women and girls and can range from domestic and sexual abuse to female genital mutilation, forced marriage, so called ‘honour based’ violence, stalking and harassment.

“We want people to be aware of the issues and to seek help, either for themselves or for a friend or relative who may be suffering at the hands of another. I would encourage everyone in our city to get involved and join us in helping to Orange Wolverhampton between 25 November and 10 December."

Councillor Wendy Thompson, leader of the Conservative Group on the City of Wolverhampton Council, said: "We are very happy to support the Orange Wolverhampton campaign and we hope that everybody will take the opportunity to get involved and say 'no' to interpersonal violence.

"This is a worldwide issue which the United Nations champions, but it's great to see organisations including the council and safeguarding partners giving it such a high profile locally."

Kathy Cole-Evans, Chief Officer of Wolverhampton Domestic Violence Forum, said: "The colour orange symbolises a brighter future and a world free from interpersonal violence, and the Orange Wolverhampton campaign is an important part of our work to make sure victims know how to get the help and support they need.

"We want to make this year's campaign the best ever – and this is your chance to get involved. There are so many things you can do, big and small, all of which will help raise awareness of these issues."

For more information and to sign up to this year’s campaign, please visit the Orange Wolverhampton website at #OrangeWolves.

Key dates include Wear Orange Day on Friday 6 December, when people are encouraged to wear orange clothing, and the return of the Orange Wolverhampton pop up shop in the Wulfrun Centre on Monday and Tuesday 25 and 26 November, at which people will be able to find out more about the campaign and the help and support available locally.

Anyone suffering from domestic violence, female genital mutilation, forced marriage, so called ‘honour based’ violence or sexual violence, stalking or harassment, or knows someone who is, should call the relevant helpline: 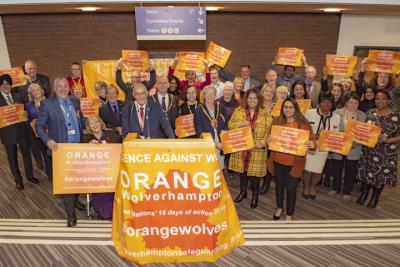 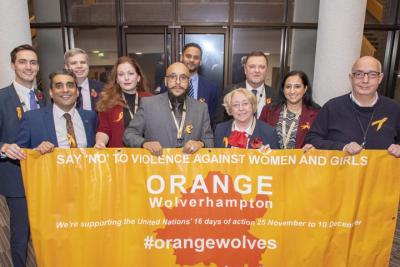